Persephone, of her own free will, descends to the Underworld in compassion for the hapless Shades, there to become Pluto's wife. Springtime accompanies her ascent back to terrestrial life and a second marriage – to Triptolemus, the first farmer. According to the cycle of the seasons, thus established, she will in due course return to the Underworld. Persephone, writes David Schiff, is Stravinsky's "other" Rite of Spring – another fertility myth about Spring's arrival. "Unlike the Chosen One in Le Sacre, Persephone chooses her fate... out of compassion for the forlorn inhabitants of Pluto's dark realm... Persephone can be read as a type of Christ, sacrificing her own life to redeem human suffering, or as an image of the socially committed artist who moves between the realms of aesthetic delight and human misery. Stravinsky's music, full of religious awe and humanistic wisdom, mirrors both readings."

Like Oedipus Rex before it, Perséphone is a presentation of a classical myth, a setting of French writer André Gide’s retelling of the 7th century BC Homeric Hymn to Demeter. The original idea came from the Russian dancer and actor Ida Rubinstein, an early member of the Ballets Russes, whose own ballet company was to stage the première at the Paris Opéra in 1934, and who danced and spoke the title role herself. The three scenes of the drama follow the course of seasons. Like a ‘classical’ retelling of The Rite of Spring, it presents a myth of the arrival of spring. Persephone, daughter of Demeter, goddess of fertility, plucks the narcissus, despite being warned not to by the Nymphs. She descends into the eternal winter of the underworld, from where she is rescued by Demeter, but it is her destiny continually to return to the world of shadows and suffering. The music has a sacred, ritualistic air, achieved by means of a lyrical and harmonic simplicity. ‘It will be just like the Mass’, Stravinsky observed at an early stage in the works gestation. With its prominent role for female chorus voices, Perséphone makes an ideal coupling for Oedipus Rex with male chorus. 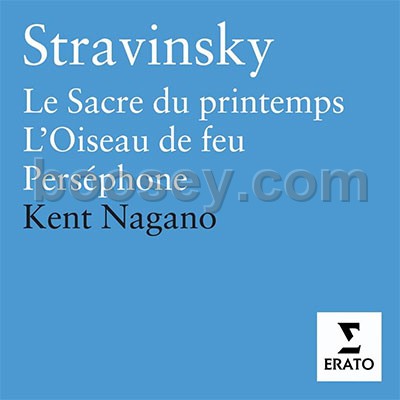