By far the best-known of Stravinsky's religious works, the Symphony of Psalms is formidably devout but never confessional. A double fugue suggests the way of God – not majestically Baroque, but factual, inexorable, Byzantine. A timeless "Aleluia" clinches the final impression of metaphysical grandeur and repose.

Commissioned by the conductor Serge Koussevitzky to write an ‘abstract’ symphony for the Boston Symphony Orchestra’s 50th anniversary, it was clear that Stravinsky had a sacred piece in mind from the moment he started composing. It became for him an act of spiritual renewal, a personal testimony, having returned to the Russian Orthodox faith in 1926 after a long period of absence. He sets three Latin texts from the book of Psalms, the last of these (Psalm 150) being a song of praise full of the noises of trumpets, pipes and cymbals, prompting the work’s unusual scoring for woodwind and brass, two pianos and harp but no violins or violas. From the arresting opening E-minor chords, via the spectacular double fugue of the central movement, to the meditative Alleluias of the finale, it is a powerful articulation of Stravinsky’s spiritual vision. It remains a popular concert work with choruses. It could also be coupled with violinless works such as Brahms’s Serenade No. 2, Lindberg’s Sculpture or Turnage’s Remembering. 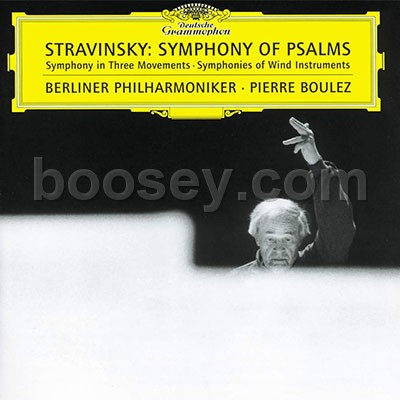