from the Vulgate (L)

Stravinsky's longest serial score, Threni sets passages from the Lamentations of Jeremiah. An unusual feature is the musical treatment of the Hebrew letters offsetting the different verses. "The effect," writes Eric Walter White, "is like that of a series of illuminated initials embellishing a manuscript; and the special cadential qualities of these brief harmonic glosses give them a curious kind of nimbus."

A setting for soloists, chorus and orchestra of the Old Testament Lamentations of Jeremiah. Like the Canticum Sacrum, it was written for and premiered in Venice. It is Stravinsky’s longest serial work containing intense contrapuntal writing. The structure is punctuated by settings of the Hebrew alphabet, described by one commentator as like illuminated initials embellishing a manuscript. Despite being scored for large orchestra, Stravinsky frequent use of chamber scoring gives the music a striking transparency . It could be effectively programmed with much earlier settings of the Lamentations, such as by Tallis, but equally with a more recent a cappella version such as that by Ginastera. Bernstein’s Symphony No. 1 ‘Jeremiah’ follows the Biblical story programmatically and, in the third movement, a mezzo-soprano sings settings of texts from the Lamentations. 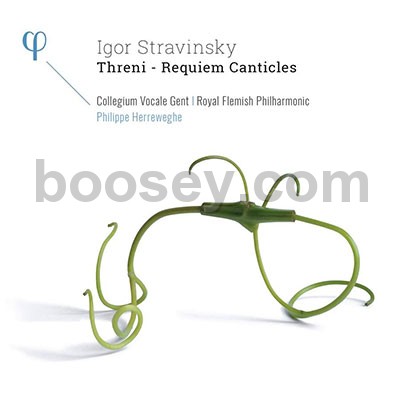