The Chinese Pictures were composed for and premiered by the recorder player Walter van Hauwe, however, Isang Yun wanted them to be performed on the flute as well. Written in June 1993 in Hohegeiss in the Harz Mountains, these four pieces demonstrate the reduced texture of his late style. The musical material is deliberately limited: each respective piece is based on different motivic cells consisting of two or three notes, which are then elaborated by means of developing variation as well as contrasting reference and derivation. In some respects the music recalls idioms of various types of East Asian flutes. With the exception of the third piece, The Actor with the Monkey, the Chinese Pictures are influenced by programmes of Buddhist origin.

The first two pieces not only have a contemplative character in common, but also a spiral-like dramaturgy which forms an upwardly arched semi-circle, the archetypical symbol for heaven. Contrasting, however, are the motivic cells: whereas the "brushstroke" treatment of the "main tone" (created by the intertwining of smaller intervals) evokes the softer impression of flowing water in The Hermit at the Water (II), larger intervals in The Visitor of the Idyll (I) allow the prolonged single tone to stand out. Both pieces - and likewise The Shepherd's Flute (IV) - are inspired by stories which exist in numerous versions in East Asia: the tales of "The Ox and his Shepherd" refer to the human being guiding his "inner child", the ox. In the autograph manuscript, the first piece is entitled "The Visitor of the Hermitage" (in the printed version: The Visitor of the Idyll), thus making a clear reference to a Buddhist place. The visitor of this idyll is a peasant who leads his ox to water to let him drink. As the title already indicates, this parable is continued in the second piece, The Hermit at the Water. A hermit arrives at the water at the same time as the peasant and begins to cleanse his ears. The peasant asks him why he is doing this, and the hermit replies: "I was in the capital city in the palace of the king where they offered me for a good salary employment as a court official. But when I asked them what my duties would be, they told me horrible things. So now I have to wash my ears." Upset about the so-caused contamination of the water, the peasant leaves the spring without allowing his ox to drink.

The title of the third piece, The Actor with the Monkey, refers to a scenic image, a monkey act, and beyond this to a traditional form of Chinese popular theatre, the "monkey play". The "monkey play" belonged to the "mixed plays" genre (Chinese: san-yüeh; Korean: san-ak; Japanese: san-gaku), which had reached Japan via Korea. Today the name "monkey play" is known only in Japan as saru-gaku. Saru-gaku evolved into saru-gaku-nô, a forerunner of the Nô-Theatre in which the flute is given a central musical role. (Saru means "monkey", but, as the Nô theorist Zeami had already pointed out at the beginning of the 15th century, it sounds phonetically similar to "revelation". For this reason the monkey can also be seen as representing the voice of the gods. Gaku means music, and the original meaning of nô is simply "skill".) However, Yun's composition hardly seems to be inspired by the sound of the Nô-flute, rather it is concerned above all with the humerous realisation of the scenic idea. Unlike the other pieces, the third piece is characterised by rapidly changing rhythms, as well as contrasts between lively circling gestures confined within a small range and more tranquil passages employing large intervals.

The Shepherd's Flute (IV) is distinguished from the previous pieces by its invocative gesture: a formal process marked by a prevailingly heavenward movement in combination with the insistence on long-drawn single tones represents freedom and spiritual liberation. The sixth chapter of the Zen book, "The Ox and his Shepherd", is entitled "Homecoming on the Ox's Back", and signifies a certain state of consciousness in which the shepherd and his ox have become one: "The battle is already over. Gains and losses are no longer of any consequence either. The shepherd is singing a rustic woodcutter's song and is playing on his flute the country-like melody of the village boys. He is sitting on the ox's back and gazing at the blue sky. When someone calls him, he does not turn around. When someone tugs at his sleeve, he does not stop" (translated into English as quoted from the German translation by Kôichi Tsujimura and Hartmut Buchner, Pfullingen: Neske 31976, 33).
Walter-Wolfgang Sparrer 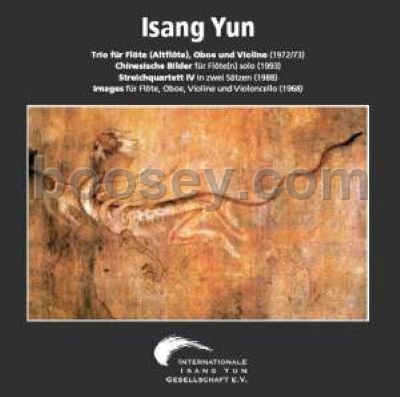