Piri is the name of the traditional Korean oboe, of which there are three types of various size. These types are mainly employed in court and aristocratic music the shorter se-p’iri in the kagok and kasa aristocratic song genres, and the larger hyang-p’iri in the court orchestra as well as in shamanistic ceremonies in which the p’iri takes on a spiritual significance. All three instruments have in common a broad tonal range as well as an uncommon flexibility and expressivity.

Isang Yun’s composition became a paradigm for the interaction and interpenetration of East Asian sound experience and European methods. The one-movement work is designed in two parts. A gradually densifying character leading by way of restless, nervously shimmering elements to the elimination of all set contours proceeds into the peace of the concluding part superscribed slowly, mysteriously. Luise Rinser, a writer and friend of Yun’s, interpreted this last part as a prayer.

Piri begins with long-drawn-out main tones attained by way of broadly spanned initial impulses and immediately modified in dynamics and tone color. The stressed initial sound, the building up to the one main tone attained through ornaments or ornamental impulses, is generally typical of traditional Korean music and of Yun’s personal style. This note is drawn out but quickly changes in its dynamics and tone color or also through the "interbeat" of an ornament or melisma. The accentuated leaving of the main tone is also typical, for example, by means of a crescendo or also a diminuendo, by means of an accent or a concluding ornament.

The first part of Piri has three sections. In the first section Yun expounds long-drawn-out individual tones, varying their initial and final impulse processes. The special aspect of this section is formed by the relatively abrupt shifts of register. After the first three main tones e3 flat, c3, and c3 sharp, Yun leaves the three-line octave and sets the middle register over against it with g1. As the conclusion of the first phrase, the music reaches with b2 flat a space lying somewhat below the initial position. In what follows Yun sharpens the abrupt shifts of register, the sequencing of very high, noisy low, middle, and high tones, which, supported by flexible articulation, appear in each case as sound spaces all of their own.

In the second section, which is somewhat accelerated in tempo, Yun incorporates intervals, as color values, into the articulation of the individual tone more clearly than previously; the tone now is expanded to the gesture already comprising several octave ranges.

The swift third section is in itself tripartite: fast, almost hectic figurations are followed by the renewed opposition of high and low tones. In upward oriented gestures which he in part ornaments with double trills, Yun again combines octave ranges and sound spaces. Finally, in the tempo ad libitum, glissando gestures are heard and end in indeterminacy.

In the quiet concluding part Yun reflects on and enhances, slowly, mysteriously, the previous course with gestures consisting of three or two multiple sounds each. Piri fades away — thus the score — almost inaudibly on the two-line g sharp. As "work in space" the higher octave is attained, in comparison to the first tone of the composition; the tension from g2 sharp to the (imaginary) A, which in the composer’s tone symbolism became a cipher for the absolute, points, however, to the work that still remains to be done.

Twelve-tone procedures are a component system within Yun’s Hauptklangtechnik (main tone technique). A sober glance at the score teaches us that Piri is organized in strict dodecaphony almost to the conclusion of the second section with nine sequences of a row. Yun then renounces this strict dodecaphony and retains only the three-tone row segments, which for the most part consist of a consonant (yin) interval and a dissonant (yang) interval.

Luise Rinser assigned the following interpretation to Piri: "Here the oboe is the voice of the captive in the dungeon. It expresses suffering but also the great attempt to overcome outward lack of freedom and to attain spiritual freedom. The many, ever-new approaches and upswings of the oboe are the attempts of the prisoner to elevate himself spiritually, just as the bird again and again launches itself into the air. Finally, the oboe soul succeeds in maintaining itself in the heights and in freedom. The piece is a virtuoso piece. But its virtuosity is not virtuosity for its own sake. It is rather the expression for the unheard-of possibilities of the human soul for elevating itself above every outward constraint. Precisely those passages requiring the utmost virtuosity, the multiple sounds, are the expression of its actual meaning: the representation of a deeply religious stance, of prayer that does not pray but peacefully submits to a great fate. The praying individual is not alone. His divine helper answers him, even if often quietly and from afar."

Piri is dedicated to the oboist Georg Meerwein. 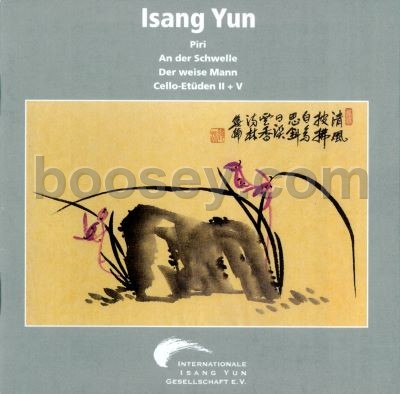