It was with the intention of thematizing contemporary problems in his art both timelessly and universally that Yun turned to the rather esoteric poetry of Nelly Sachs (1891-1970) in 1980. This Jewish woman poet had been forced into exile from Berlin to Stockholm in 1940. The experience of the Nazi dictatorship figures importantly in her poetry influenced by Jewish or Hasidic mysticism.

Yun selected three texts for musical setting as a solo cantata from Teile dich Nacht, a volume of poetry published posthumously in 1971. "Diese verschlossene Tür," the first stanza of the second of three poems bearing the title "Suche nach Lebenden" (winter 1969/70) makes direct reference to the Holocaust. "Vor meinem Fenster" can be read as a reflection of human relationships in an alienated present. Like the text of "Teile dich Nacht," this text was written by Sachs as an independent short poem in October 1969. Yun understood the third poem, the six-verse "Teile dich Nacht," as an admonition urging humanity to decide in favor of a better future.

Representing all injustice, the poem "Diese verschlossene Tür" laments the stance of knowledge but inaction in reference to the outrageous crimes committed in the fascist concentration camps and death camps. In its movement of "transformation" characteristic of Sachs (and of Yun and East Asian thought), the text nonetheless contains a consoling turn in the passage "Der Tod aber ist offen / Erst dahinter leben die Geheimnisse."

The second of the poems selected by Yun for his composition proceeds in the opposite direction, taking its point of departure from the image of opened space (e.g., of a window), an image lending expression to the animated interest and differences of an I-you relationship.

In the concluding text, "Teile dich Nacht," the poet’s personal presentiment of death overlaps with an apocalyptic vision. A sentence published by Jacob Grimm in the supplement to his Deutsche Mythologie (1835) may help us to understand the metaphor of the divided night: "So the crow with its wingbeat divides the night, so that light penetrates." It is only when the two wings of the black crow darken the light of the night that we become conscious of the existence of this light. An interpretation interpolating the image of the crow for our understanding of the Sachs text also makes the bird’s-eye view from on high or beyond, from cosmic distance, appear more vividly. The wings of the crow (of the night) tremble with rage in view of the earth. The verse "denn ich will gehn" is to be read both as a presentiment of death as well as figuratively as the idea of splitting (or dividing). That which goes can be understood (following Martin Buber) as the touching of the you constituting relationship and partnership or simply as the positive power (also of reason) that, when it turns away or goes away, brings back the "bloody evening."

This theme inspired Yun to compose a setting for soprano and chamber ensemble that does not shy away from open contrasts, even those articulated in general rests. (Open contrasts form an exception in his oeuvre inasmuch as they run counter to his aesthetic creed of seamlessly flowing courses of events.) The work begins with a rapid and vehement tutti (woodwinds, horn, harp or piano, strings, and here, of the piece’s many percussion instruments, the xylophone). Yun sets the verses "diese verschlossene Tür / dahinter geschah das Furchtbare" in Sprechgesang, more slowly, virtually "motionlessly," and in dark colors, with the interpretive markings ranging from "violently lamenting" to "almost voiceless." After a commenting tutti interjection the verse "Du siehst was dahinter geschah" initially appears as a sung report and then as an accusation in its subsequent repetition in Sprechgesang. Yun translates the questions about distance and death in the pitch sequence of a semicircle vaulting upward, in an archetypical musical symbol of heaven.

An interlude with strings in glissandi in double flageolet, harp or piano, glockenspiel, and a flute solo symbolizing the bird functions as a transition to the second poem, "Vor meinem Fenster." Strong dynamic contrasts again stand out. For example, the dynamics at the verse "der schilpende Vogel" are always extremely quiet, but in the echo passage Yun designs its chirping as a musically excited event. As a climax, the verse "denn ich will gehn" sounds almost like a scream. It is repeated whisperingly in Sprechgesang in a sort of coda. Here the process of becoming speechless is expressed in the composition.
Walter-Wolfgang Sparrer 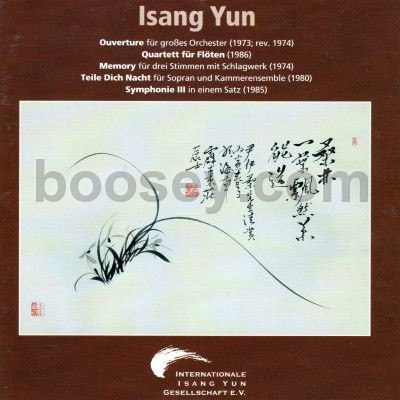