It is frequently forgotten that Offenbach was one of the greatest cello virtuosos of his time before he attained fame as the creator of the French opéra-bouffe. Owing to his literally diabolical virtuosity, he was referred to as the “Liszt of the cello.” Indeed, he even appeared together with Liszt, but also played numerous concerts in Paris and Germany with Anton Rubenstein and Friedrich von Flotow. It was Offenbach who introduced Beethoven’s cello sonatas to France. Much greater than his joy of performing, however, was his passion for composition. Thus, starting at an early age, he wrote an impressive amount of works for his favorite instrument: many smaller pieces, but also large frescos like the Danse Bohémienne, the Grande Scène espagnole and, above all, the Grand concerto pour violoncelle et orchestre (also known as Concerto militaire). Parts of the latter work were premiered in a concert that Offenbach gave on 24 April 1847 in Paris’ Salle Moueau-Santi. It is very likely that Offenbach played his concerto on other occasions, but only one further performance on 24 October 1848 is reliably documented. Subsequently, a century was to pass before Jacques Brindejont-Offenbach, the composer’s grandson, was to entrust the cellist Jean-Max Clément with the piano sketches and the score of the first movement. Clément copied the beginning of the work from the original, unfortunately suppressing several passages that Offenbach himself had left out in his performances. He then set out to reconstruct the work, orchestrating the last two movements from the piano sketches. Neither Clément nor Brindejont-Offenbach knew that the autographs of the Andante and the Rondo Finale (fully composed and orchestrated by Offenbach) were to be found in the family archives. Since these documents did not carry titles, and because Offenbach had substantially modified the openings of these two movements, it was difficult to establish the relationship between the individual pieces of the puzzle. Because Clément’s edition was extremely unbalanced and incomplete, it did not enjoy, as an apocryphal version of the concerto, any great success. In the meantime, Offenbach’s estate, and with it the autographs of the three movements, was scattered to the four winds. We were therefore very lucky that our search led to the discovery of the complete autograph of the second movement in the Historical Archive of the City of Cologne, and of the Rondo Finale in the Library of Congress in Washington. The autograph of the first movement was acquired just a few months ago by the Bibliothèque nationale de France after having spent a long period in the collection of an eminent conductor. Parallel to this, we were able to find the complete performance material of the first movement, which had been employed for the Parisian premiere, in the possession of the Offenbach family.

These sources were thus never completely evaluated and above all not recognized as the missing parts of the Concerto militaire. And yet it all seemed so obvious, particularly with regard to the Adagio, which is more or less identical to the sketches that Clément employed, even if the definitive score is further developed. And as far as the third movement is concerned: although certain themes deviate entirely from those of the sketches, there are others that are identical in form in both sources. Significant, however, is the similarity and consistency of the orchestral timbre, the tonalities, and above all the uniform character of the different sections of the work, the character that Offenbach described as “military,” In fact, it can hardly get more military than in this movement – at times very resplendent and cheerful, at times disquieting, if not to say painful – in which Offenbach anticipates certain Mahlerian turns of phrase.

When we collate all these widespread sources and evaluate them as a whole, they fit together to form a major work of the cello repertoire, a work that differs significantly from that which was hitherto presented as an attempted reconstruction.

Since Offenbach’s autograph is rather stingy with phrasing markings in the solo part (for the simple reason that the composer was his own interpreter), we have taken recourse to a secondary source in this matter, namely an (undated) copyist’s copy of the score of the first movement. In addition, a new piano score for cello and piano has been prepared for rehearsal purposes. 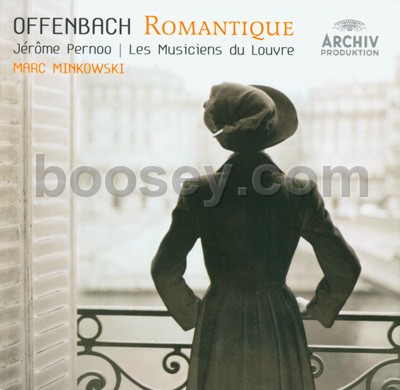