Britannia was written in 1994 as a celebration of a major force in our musical life, the British orchestra. The work fulfils a commission from British Telecommunications plc with the Association of British Orchestras as part of the BT Celebration Series, and provides all the major UK orchestras with a new concert overture for performance in the 1994/95 season.

Britannia is a ten-minute orchestral fantasy based on ‘patriotic themes’. There is no programme of story as such but the tapestry of popular melodies and resonant allusions, given their new and unfamiliar contexts, may provoke some surprising scenarios in the mind of the listener, particularly at a time when petty chauvinism threatens to rear up once again throughout Europe. The piece grows out of a short sketch written earlier this year, Mémoire Impériale, which is based on a march tune by General Reid, an 18th century British army officer who established the music department at Edinburgh University. This theme and the ‘imperial’ themes of Elgar and Arne are thrown into a volatile concoction with other materials – an Irish reel (which becomes a jig), a Cockney drinking song, other march tunes and a hazy Celtic modality.

All the main ideas are presented in a quick and stark succession during the fast opening section. The slow middle part begins with a serene canon which is gradually undermined by military allusions on brass and percussion. This confrontation leads to the work’s climax followed by an unsettled coda.

Britannia is dedicated to Libby MacNamara of the Association of British Orchestras.

"...a Charles Ivesian spree in which bits of Elgar, Vaughan Williams, Britten and other British icons are irreverently and skilfully insinuated into a bustling, elaborate texture fond of reverting into a kind of Celtic reflectiveness. It was a little like Brahms's Academic Festival Overture in reverse..."
Sunday Times 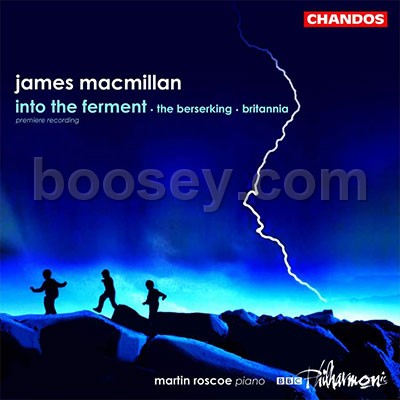