In writing this work I wanted to compose something which was both timeless and contemporary, both sacred and secular. The title (Sacred Songs) is therefore slightly misleading as the three poems are concerned with political repression in Latin America and are deliberately coupled with traditional religious texts to emphasise a deeper solidarity with the poor of that sub-continent.

It was my interest in Liberation Theology which made me combine the poems of the Mothers of the Plaza de Mayo in Argentina with the texts of the Latin mass in Búsqueda (an earlier music-theatre work) and has now led me to attempt a similar synthesis of ideas in Cantos Sagrados.

The voices in Ariel Dorfman’s poems belong to those who suffer a particular type of political repression: the ‘disappearance’ of political prisoners. Ana Maria Mendoza’s poem about the Virgin of Guadeloupe tackles the same problem by asking a more fundamental cultural and historical question.

One of MacMillan’s most powerful works, Cantos Sagrados sets poems by Ariel Dorfman and Ana Maria Mendosa on the subject of political repression in Latin America combines with traditional religious texts in Latin. The choral writing ranges from agitated speech-like violence to rapt meditation, and the organ part is a showcase for a talented soloist. The composer created an alternative orchestral version in 1997 making the work equally accessible to symphonic choruses.

As MacMillan states in his preface to the score ‘the title Sacred Songs is …slightly misleading as the three poems are concerned with political repression in Latin America and are deliberately coupled with traditional religious texts to emphasise a deeper solidarity with the poor of that subcontinent’.

This is a powerfully effective work that is not very difficult for the singers (the organ part is quite virtuosic and needs an accomplished player) although there are, as usual, points in the work that present some challenges. The second movement is unaccompanied for a substantial part of the first section that could lead to pitch problems when the organ/orchestra eventually joins. The third movement (in which a political prisoner is shot and his executioner begs him for forgiveness) uses MacMillan’s effective chorale-like vocal parts (with Latin words) which are interspersed by increasingly neurotic interventions from sopranos and then other voices which build to a huge climax as the shots are fired, gradually subsiding to a whispered ‘forgive me compañero’ at the end. 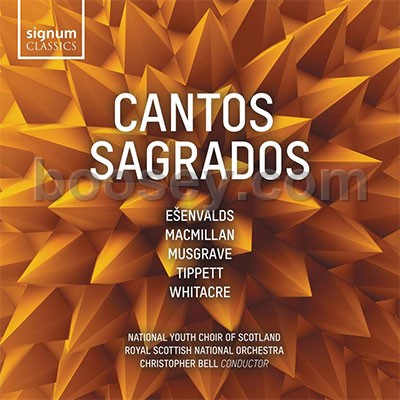