Cumnock Fair is a twelve-minute fantasy based on dance melodies by the 18th century composer from Cumnock Ayrshire, John French. It was commissioned by Cumnock Music Club for its Golden Jubilee concert in 1999. It is thought that Robert Burns knew John French and that the composer played the fiddle for the dance classes reluctantly attended by the poet as a young man in Ayrshire. French was also a friend of James Boswell, Dr Johnson’s amanuensis and dedicated many of his compositions to him and to his wife. This work quotes clearly from one of these "Mr James Boswell’s Jig" and alludes to another (which is more hidden) "Mrs Boswell of Auchinleck’s Reel". French’s original Cumnock Fair, a strathspey, is also quoted audibly.

The piece begins with a fast, unison chromatic melody which, when repeated and harmonised, sounds like an imaginary folk dance. The low cello, double bass and piano then take up the above-mentioned jig where the musical instruction is "galumphing (ungainly, ma giocoso)". The earlier, playful dance reasserts itself before being cut off by a suddenly exposed piano solo, based on a four-note rising figure.

After a few more interruptions by the strings this new material becomes dominant and provides the basis for the central, slow, dream-like section, evoking fragments, ornaments and intervals from the John French originals. The piano writing becomes more emphatic and violent, from which then emerges the original Cumnock Fair strathspey played on upper strings and harmonised in a new and ethereal way.

An anxious version of the jig attempts to intervene a couple of times before the strathspey is pounded out in a heavy, nightmarish passage marked "brutal and grotesque". The music by this stage, has passed through a number of contrasting moods. Finally, as earlier material tries to recapitulate itself the work draws to an ambiguous, mysterious and surprising close, as if a number of question marks hang ominously over its final bars.

Cumnock Fair is dedicated to Isabel Crawford, secretary of the Cumnock Music Club. 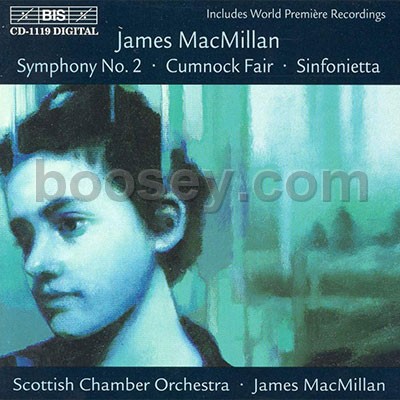