The two central concepts at the heart of this creation and redemption story in both Menahem Nahum’s book and Michael Symmons Roberts’ poetry are Zimzum - the holding back of God’s power and light to make space for something other than Himself, and Shevira - the smashing of the clay vessels intended to capture the intense light of God’s creation. The two words form the basis of a refrain which recurs between each song, binding the poems into a single seamless entity. Another binding ingredient is a little cell of three notes involving the rise of a minor third and a falling semitone (and variations and developments of this) which control and generate much of the song-cycle’s material.

The first song includes some very fragile and tentative music for both singer and ensemble. The effect is mystical and introductory, preparing the way for Songs II and III in which the cycle’s greatest weight and through-composed musical argument is contained. The style of these two songs is narrative and dramatic, covering a wide range of feelings, concepts and images from the everyday to the transcendent.

Song IV has a sense of danger and evil, and a whiff of pogrom. The atmosphere is created by special effects on piano and harp and with a mournful, incantory melody on viola and cello. The ‘catherine wheels’ at the end of the poem spark off an incendiary instrumental interlude which, in turn, leads to Song V which is intimate, sparse and recitative-like. The final song introduces the familiar popular archetypes of chorale, folksong and folkdance before fading to a calm but mysterious close.
James MacMillan, August 1997

"Based on a Hassidic creation myth, it depicts the outpouring of God's love into a clay vessel which explodes, showering the universe with scattered "sparks"... MacMillan's response is slow-moving, spare, intense: reminiscent of the dark but spiritually-directed music coming out of Russia..."
Independent on Sunday 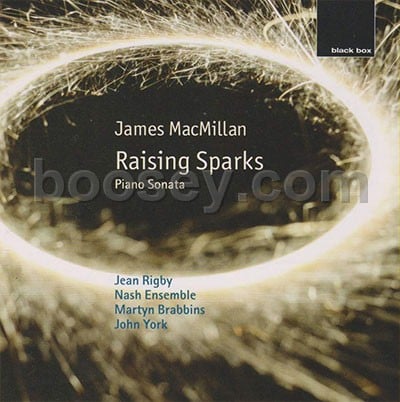