from the Roman Breviary (L)

SATB vocal ensemble, with divisi up to SSAATTBB (eight singers on stage)

Written in 2006 for Cappella Nova (who have recorded the work, a number of the Strathclyde motets and the Missa Brevis on one CD). In three movements, all of which represent different challenges. This is certainly a work for a professional choir, and one with a very secure sense of pitch. The first movement provides the ultimate challenge of multiple chromatic scales – often a nightmare for accurate tuning. But here is another work which is so deeply moving, so effective and affecting through a strong and committed sense of performance that these heights are beyond doubt worth scaling. MacMillan acknowledges a debt to the great Renaissance masters, Gesualdo and Victoria who set these texts and Gesualdo, in particular, is an obvious influence, as, curiously, is Wagner in the chromatic working out of the initial phrase in the first movement which returns at key points. MacMillan loves his choral outbursts as we see in a number of his works, and both the second and third movements begin with three such declamatory figures. The third movement is also characterised by long pedal points.

There is a great deal of ornamentation which is a fundamental characteristic of his style and which needs singers of confidence to put across clearly. There are challenging new notes to find across silences in wholly different chords from previous ones. These are issues professionals are used to dealing with, and yet I would hope that there would be many outstanding amateur choirs out there who would try these wonderful pieces. Rehearsal over a longer period of time would add depth and substance to the understanding and interpretation of what are remarkable representations of textual imagery in music.

"This is a great work... The Tenebrae settings are complex and highly dramatic. MacMillan employs contrapuntal and chromatic lines, ornamentation derived from Jewish cantolation, glossalia and humming... "
Church Times 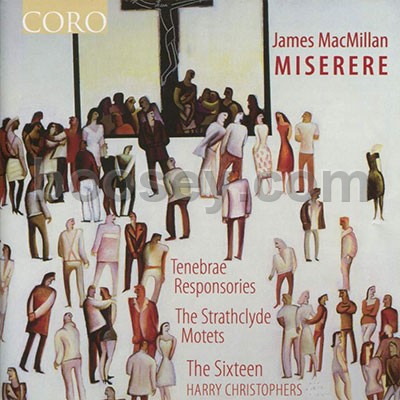