This is a single-movement work based on a ‘ghostly’ theme of seven notes (and three pitches) which is heard at the start and repeats in many different guises throughout the opening slow section. Each time it is joined by new counter-material, most importantly a high expressive melody on solo trombone. This solo material descends in tessitura as the other accompaniments become busier and unsettled.

Eventually the music gives way to a dance-like ‘scherzo’ variation, based on the opening melodic shape. This is an Allegro, marked marcato e ritmico. This halts abruptly when some of the opening slow counter-materials return and are briefly developed, principally a prominent flute melody.

A new dance rhythm takes over, a flowing waltz-like idea, again a variation on the opening theme. Gradually this poise is undermined by fast scurrying on the lower instruments, which eventually throws the music forward into the central ‘development’ and the pulse gets faster and more frantic. This is halted briefly by a contrapuntal quartet for the four trombones, before the music reaches its fastest point, dominated by the sound of a siren!

The quartet music is reprised, but this time with four violas. This heralds the main slow section of the concerto, which is initially hymn-like in character, but settles to an episode which highlights the trombone in ‘discussion’ with solo horn and two solo cellos, where the music is marked delicato e lontano, espressivo, dolente and ‘like chamber music’. A new, high, intervallically-altered and ethereal version of the main theme arrives at the end of this, and the concerto finally moves to the final dance-like section, throwing ‘chugging’ strings against virtuoso fast tonguing on trombone.

This climaxes in a cadenza where the four trombones have a final semi-improvised conversation before a brief codetta, dominated by the hymn-like expressivity from earlier. The concerto is dedicated to Jörgen van Rijen and in memoriam Sara Maria MacMillan.
© Sir James MacMillan 2017

“The new work proved to be vintage MacMillan. There’s a wonderful mixture of timbres, sacral glowing melodies, rich chording and ear-splitting eruptions of sound – all in a kaleidoscopic form with a unifying hymn theme… it works in MacMillan’s hands, perhaps because of the magical orchestration, in which liquid woodwinds drip through a fine sonic mesh of harp and vibraphone. Or where unusual echoes follow one another in strings, piano and harp. Or when sudden apocalyptic cacophony emerges from percussion, brass and a siren.”
NRC Handelsblad

“...this magnificent concerto enriches the repertoire... The trombone sang, sang, sang… then suddenly a spectacular mating dance of four trombones à la Stockhausen. At the very end van Rijen and MacMillan struck me down completely: between the serene harmonies which came to a moment of rest, the trombone once more entered with a heart-breaking eruption… the wonderful beauty of despair… It is a concerto for eternity, and trombone players could use one.”
De Trouw 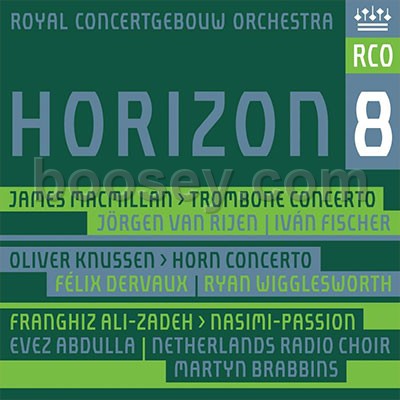