A few years ago I came across a love poem by William Soutar written in broad Scots, called The Tryst which I set to a very simple melody. This melody has persistently appeared, in various guises, in many works composed since – a congregational mass setting, a tiny fragment for violin and piano (After the Tryst) and more recently in my music theatre piece Búsqueda. Not only has it cropped up again in this piece, but it has provided both the title and the emotional core of the music.

Its melodic characteristics, matching the original words, seem to imply many very strong associations – commitment, sanctity, intimacy, faith (it is used specifically in the Credo section of Búsqueda), love, but it is also saturated with a sadness as if all these things are about to expire.


The music is in one continuous movement, but divided into five clearly defined sections, the slow middle section being the point where the melodic potential of the original tune is again explored. It is here elongated and ornamented on the strings, behind which one hears pulsating, throbbing colour chords. The opening section of the works is fast, energetic and rhythmic. The second section begins with slow homophonic wind chords which are interrupted by fast, violent interjections on the strings. These interjections gradually become more pervasive and expansive while the wind music transforms itself into shorter more brutal intrusions (i.e. the two music’s influence each other so that one eventually becomes the other and vice versa).


After the slow third section, the melodic material from the opening is now presented in a quick, rhythmically brittle, but simple structured verse and refrain form. The final section combines fast music with solemn chordal ideas from the middle section. Tryst is dedicated to Susan Loy, my Grandmother, who died in 1989.

"This piece has a powerful sense of propulsion, its potency resulting from the insistent way he works round, manipulates and develops an idea...to produce music of compelling cumulative energy."
Daily Telegraph 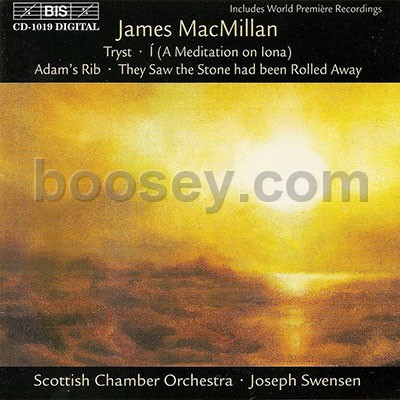