This work is dedicated to the victims of the Piper Alpha disaster and their families. On the evening of 6 July 1988, a fire broke out on the Piper Alpha off-shore oil and gas platform located in the North Sea. The fire was incontrollable and evacuation plans inadequate. As a result 167 men died and 62 had to be rescued from the sea.

Tuireadh is Gaelic for a lament (or requiem) for the dead, and the piece was written as a musical complement to the memorial sculpture created by Sue Jane Taylor and unveiled in Aberdeen in 1991. I was specifically inspired by a letter sent to me by the mother of one of the dead men in which she wrote movingly of her visit to the scene for a memorial service. The ceremony became a rite of passage for those whose loved ones had not been found, and the mother described how a spontaneous keening sound rose gently from the mourners assembled on the boat. Tuireadh attempts to capture this outpouring of grief in music and makes allusions to the intervallic and ornamental archetypes of various lament-forms from Scottish traditional music.

"Tuireadh, for clarinet and string orchestra, is a thematically terse elegy for the victims of the Piper Alpha oil rig disaster in 1991, searingly intense and precisely focused; MacMillan has written nothing better."
The Guardian 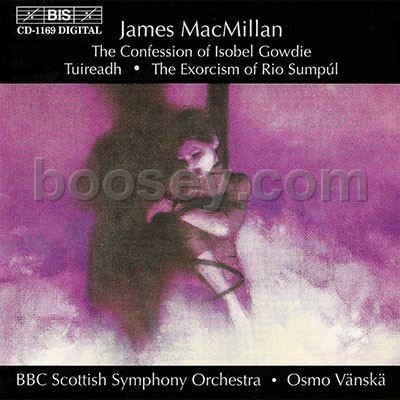