Certain concerns prevalent in some of my works of the 1990s, namely a sense of ambiguity between darkness and light and the confrontation of extremes, resurface here in my second string quartet. In terms of mood there is an attempt to present a sense of celebration within a context of danger and violence. Children’s themes appear again as they did in my opera Ines de Castro, Cello Concerto and Symphony: 'Vigil'. However, the themes used here are quotations of and allusions to melodies written by me as a child some thirty years before.

The music is in one continuous movement divided into four main sections. A slow introduction presents the principal idea - a chromatically twisting melodic line on violin, accompanied by the first ‘childhood’ theme, plucked and resonated on the other instruments. This leads to the first main section which involves a number of characteristics: a fast sul ponticello scurrying in parallel motion, the ‘childhood’ theme on high sustained harmonics, a variation of the principal theme accompanied by biting semi-quaver bursts, and the main theme transformed into a waltz for viola with strangely tangential comments on violin and cello. The section culminates in a longer, meatier passage involving a combination of disparate elements, led by a muscular melody passing from instrument to instrument.


The second section is based on a second ‘childhood’ theme, here remodalised to fit the new context. It is first carried on a high cello with the melodic notes resonated on the other instruments to form a shadow. There is then a slow intense pulsing on viola and cello over which there are fragmented versions of both ‘childhood’ tunes.


The return of the high cello sweeps towards the next section - a fast brutal scherzo. The short violent glissandi which proliferate are eventually transformed into a high ethereal sheen, gliding through the natural harmonics. The final slow section gathers up fragments of all the principal ideas, but now much more tentative and broken.


The title is taken from the Jewish rite of commemoration on the Seder Night which is that before Pesach (Passover) begins. Here the family celebrate the flight of the Children of Israel from Egypt. The youngest present asks "Why is this night different from all other nights?" before the father relates the tale of flight and liberation from slavery.


The drama of the story, the centrally important figure of the child in the ritual, the closeness between elation and despair and between joy and fear together suggested the archetypes which lie behind my musical interests. They provided the initial spark of inspiration for this piece. 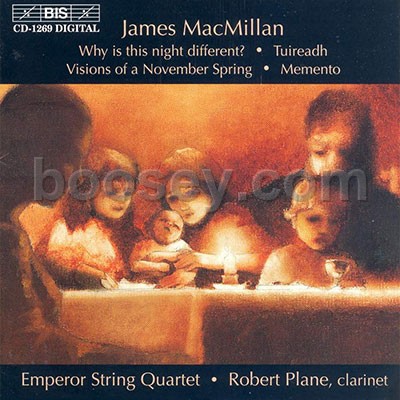