Thoughts while composing Sérac for orchestra:

Actions and decisions (not all actions follow a decision) have consequences and results, that are often not directly (causally) derived from the actions themselves.

Relationship:
What relates to one another and is "conceived" together, need not necessarily stand alongside one another. The relationship remains existing over longer stretches.
=> Long-distance relationship

Extremely different material becomes comparable by way of the function (or position) that it holds.

Sérac:
In 2008, eleven mountain climbers died on K2, most of the fatal accidents took place at the so-called bottleneck that is surrounded by "Séracs" (Séracs are tower-like formations of glacier ice that form at the edges of glaciers and can often collapse without warning.)
I have no interest in artistically "depicting" this tragedy. Instead, what interests me is how an entire chain of events can be triggered by several (unthinking, naïve) decisions and actions, developing a dynamic all their own so that the subsequent processes no longer can be traced back to the triggering moment.

Mediacy <=> Immediacy:
Something stands immediately next to something else.
Immediacy always refers to our understanding, it is usually an "apparent" immediacy.
Mediation takes place for example on an entirely different level, or erratically: something immediately "interpolated" refers perhaps to something long prior and is thus in the position to change a context, a process, etc. by way of its apparent immediacy. The contrast provokes the listener, who almost automatically tries to mediate and usually finds a link (even if remote). Speculating on this, I can build as a composer. I bring something into the composition that lies outside, that emerges with the performance, with reception. Composition does not stand on its own in isolation.

The Sérac as a key site on the expedition:
One needs to confront the danger that the serac can collapse at any time. The "non-existent" thus becomes part of reality. Possibility forces action.

Discovery:
Pedagogical aspect: as a composer I discover (not coincidentally), but create an environment that allows for discovery. But the composer only has partial control and is in turn controlled by his own discoveries.

Sérac as a metaphor:
Collapsing and burial hide prior linkages and context thought secure, but also open the possibility of casting a gaze on what was was buried, on relationships, contrasts, etc., which makes many things appear in a different, "new" light.
(explicit <=> implicit)

Secrets:
Partial aspects of a secret have to be aired to maintain interest. If the partial aspects become more important than the secret itself, a dynamic can develop that is simultaneously interesting and dangerous-deceptive:
- Interesting, since in this way a small, unimportant thing (the "secret") suddenly can become the trigger of a chain of unexpected events, that demand attention, activity.
- Dangerous-deceptive, since at issue is deception or self-deception, which can quickly become a justification for something unjust.

Density of information <=> density of sound

Discovering worlds:
Worlds not separate from another, but worlds that emerge separately.

Something existent is created anew in discovery or rediscovery. One moves within it, becomes part of it, changes it, changing oneself as well.

Question: Can something familiar, something with a history, divorced from its familiar context, be developed in a new way as material, as a possibility that we recognize?

Max Frisch, Tagebuch 1946-1949:
"...the concern of a craftsman disappears behind a sense of moral care, the combination of which probably results in the artistic, and for this reason nobody can approach what they marvel about the old: because he can at best do it, but not complete it."

"Séracs are tremendous columns of ice which can unpredictably collapse, bringing death in their wake. Borowski adopts a similarly daring approach to composing in which, like Richard Strauss, he imposingly engineers large formats and orchestral grandeur, setting powerful structures of sound in motion. This is all organised impressively and effectively, surprise following surprise, offering scherzando motor-rhythms to alleviate the monumental."
Neue Musikzeitung 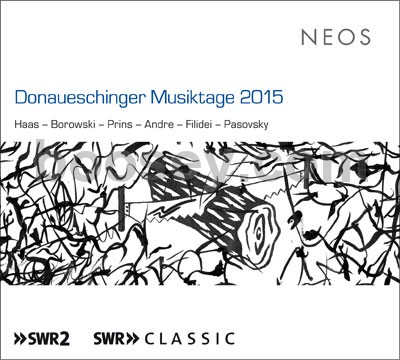