City Noir is a symphony inspired by the peculiar ambience and mood of Los Angeles ‘noir’ films, especially those produced in the late forties and early fifties. My music is an homage not necessarily to the film music of that period but rather to the overall aesthetic of the era. This symphony becomes the third in a triptych of orchestral works that have as their theme the California experience, its landscape and its culture. The two previous are The Dharma at Big Sur (also commissioned by the Los Angeles Philharmonic) and El Dorado (commissioned by the San Francisco Symphony). City Noir was commissioned by the Los Angeles Philharmonic in association with the London Symphony Orchestra, Cité de la Musique and ZaterdagMatinee.

“Making a telling artistic statement, Mr. Dudamel began his tenure conducting the premiere of the new Adams piece, City Noir, a bustling, complex work… He has become a master at piling up materials in thick yet lucid layers. Moment to moment the music is riveting.” NYTimes

“The first movement, titled The City and Its Double, is a swirling panoply of scurrying strings and winds, ominous brass chords, syncopated jazz drumming, along with, typically in Adams, syncopated everything. Melodies appear as inexplicably as a dirty blond in Philip Marlowe’s office. The second movement is softer and, on the surface, sweeter than the first, and jazzy … The third movement, Boulevard Night, begins with a CinemaScope sunrise, which is followed by a dazzling trumpet solo. Stravinsky pops up here as well in a knockout finale.” LATimes 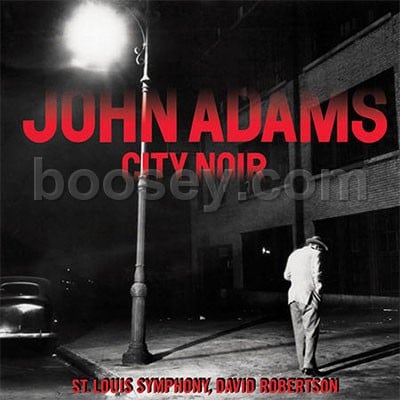