The Alleged Dances were the next pieces written after the Violin Concerto, a complex work that took a full year to compose. The Concerto emboldened me to go further with string writing, and some of the techniques and gestures I’d touched on in it appeared again in the new string quartet, only in a less earnest guise. The “Book” is a collection of ten dances, six of which are accompanied by a recorded percussion track made of prepared piano sounds. The prepared piano was, of course, the invention of John Cage, who first put erasers, nuts, bolts, and other damping objects in the the strings of the grand piano, thereby transforming it into a kind of pygmy gamelan. In the original version of Alleged Dances the prepeared piano sounds were organized as loops installed in an onstage sampler, and one of the quartet players triggered them on cue with a foot pedal. This made for a lot of suspense in the live performance—perhaps too much, as the potential for crash-and-burn was so high that Kronos eventually persuded me to create a CD of the loops, a decision that allowed for significantly less anxiety during concerts.

The dances were “alleged” because the steps for them had yet to be invented (although by now a number of choreographers, including Paul Taylor, have created pieces around them). The general tone is dry, droll, sardonic. The music was composed with the personalities of the Kronos players very much in mind. The little pavane, “She’s So Fine,” for example, is expressly made for Joan Jeanrenaud’s sweetly lyrical high cello register, and the hoe-down, “Dogjam”, honors David Harrington’s bluegrass proclivities. 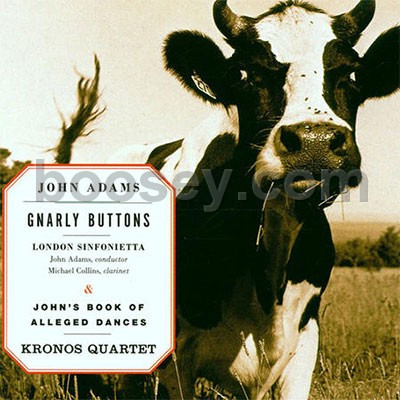