"Naive" and "sentimental": I use these two terms knowing they may at first be misunderstood I mean them not as we commonly interpret them but rather in the sense that Schiller used them in his essay "Über Naive und Sentimentalische Dichtung" ("On Naive and Sentimental Poetry"), a once-influential essay from 1795 which has by now been all but forgotten. Schiller saw essentially two types of creative personalities: "those who are not conscious of any rift between themselves and their milieu, or within themselves; and those who are so concious." (I quote from Isaiah Berlin, who so succinctly summarizes Schiller’s point of view.) The "unconscious" artists are the naive ones. For them art is a natural form of expression, uncompromised by self-analysis or worry over its place in the historical continuum. "They see what they see directly, and seek to articulate it for its own sake, not for any ulterior purpose, however sublime." Schiller cites Homer, Shakespeare, Cervantes and his own contemporary, Goethe, as examples of the naive. Opposed to this is the sentimental poet whose art "comes about when man enters the stage of culture where the primordial, sensuous unity is gone…The harmony between sense and thinking , which in the earlier (naive) state was real, now exists only as an ideal. It is not in a man, as a fact of life, but outside him, as an ideal to be realized." The sentimental voice arises when the unity has been broken, and the poet (or composer or painter, etc.) seeks to restore it or, going to the opposite extreme, parodies or satirizes it. In Isaiah Berlin’s words, the sentimental artist "looks for the vanished, harmonious world which some call nature, and builds it from his imagination, and his poetry is his attempt to return to it, to an imagined childhood, and he conveys his sense of the chasm which divides the day-to-day world which is no longer his home from the lost paradise which is conceived only ideally, only in reflection." For Schiller the poet "is either himself nature (and thereby naïve), or else he seeks nature (and is thereby sentimental).

Like all dichotomies Schiller’s can be taken too far and become strained, even ridiculous. But as a novel way of looking at artistic behavior and at the creative process his distinction is a provocative one and for me more illuminating than the more familiar polarities we so often encounter at concerts and art openings: "Classical vs. Romantic", "Apollonian vs.Dionysian", "Modern vs Postmodern", and so forth. Of course the possibility for any truly "naïve" art to exist in our ferociously art-historical and self-conscious times is virtually nil. Nowadays all art is in one sense or another self-referential. For gallery-goers and concert and theater audiences "Statement by the Artist" is a rigorously obeyed prerequisite before the consumption of any new artistic experience. The constant stylistic upheavals in both classical and popular music testify to a painfully acute self-awareness, and the more strident parodists of time, the Frank Zappas and Jeff Koonses, express the sentimentalist’s outrage at having too much historical debris to wade through.

Even writing about my own work, as I now must do, brings my own creative process out of the realm of the spontaneous into the harsh light of verbalization, reason and analysis. This particular piece, perhaps more than any of my others, attempts to allow the naïve in me to speak, to let it play freely. Mahler and Ravel, two intensely "sentimental" composers, spent their lives trying to achive the "naïve" state of mind. Reconstructing the images and emotional tonalities of childhood was their way of trying to attain that impossible "naïve" state of grace. Knowing full well that the "naïve", like the fox’s grapes, can exist now only as an unreachable ideal, I use this quest only as an engine in the search for my own sense of balance. Thus, writing for orchestra at a time when the epoch of great orchestral music has already flowered and passed is itself a deeply sentimental act. But it can also be a naïve one, because speaking through the medium of the orchestra has always been a natural and spontaneous gesture for me. In that sense I am "at home with my medium" (a prerequisite for Schiller), and what comes out is, insofar as it can possibly be, spontaneous and emotionally fulfilled music.

The piece was written between the spring of 1998 and the following winter, and it is dedicated to Esa-Pekka Salonen. My admiration for his work is based in part on my understanding of his own "bipolar" musical existence. The composer who is also a conductor experiences daily the jarring collisions of public and private, of extravert and introvert, and the harsh divisions between one’s inner and outer lives. "E-P" seems to move between these two worlds better than most, and since my piece is about polarities, it seems a fitting dedication. The Los Angeles Philharmonic and I have enjoyed a long association, and this marvelous group of musicians has performed almost every single one of my orchestral pieces under under William Kraft, Simon Rattle, Leonard Slatkin, David Allen Miller, Esa-Pekka Salonen and the composer himself.

"At home with my medium" meant using a three movement form for this large-scale, 45-minute work which, aside from my two operas, is the most ambitious of anything I’ve yet to write. The first movement is an "essay on melody" and is governed by the "naïve/sentimental" tune, a melody that begins the music and floats throughout the twenty-minute structure like an ideé fixe, usually accompanied by the strumming of the guitar and harps. The conceit of an extremely simple diatonic tune that leaves the nest and ventures out into the wide world like a Dickens child has its predecessors in several earlier pieces of mine: the "Chorus of Exiled Palestinians" from The Death of Klinghoffer and, more recently, the final movement of my clarinet concerto, Gnarly Buttons, "Put Your Loving Arms Around Me."

The second movement, "Mother of the Man", is a gloss on Busoni’s Berceuse élégiaque. Busoni’s subtitle for this little-known piece is "cradle song of the man at the coffin of his mother." Not only does the very choice of title by Busoni epitomize the clash of "naïve" and "sentimental", but it also summons an archtypical scene that lies deep in the subconscious of every person, the death of the mother and the man or woman’s desire to return to the uncorrupt state of infancy.

For those who know my earlier music, "Chain to the Rhythm", the last movement, will be appear to be full of familiar Adamsian flora and fauna. Small fragments of rhythmic cells are moved back and forth among a variety of harmonic areas and in so doing create a chain of events that culminates in fast, virtuoso surge of orchestral energy. The orchestration features a particularly large percussion section whose activity centers more on delicacy of timbre than on forcefulness of sound. 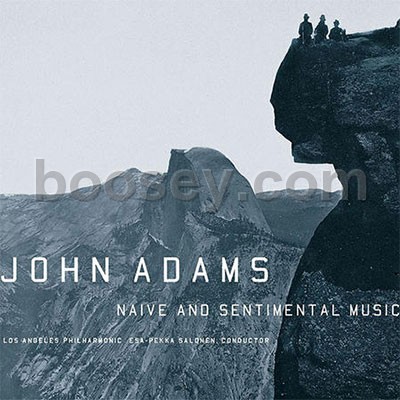