The impetus for the piece was an exhibition at the Institut du Monde Arabe in Paris detailing the history of the "Arabian Nights" and of Scheherazade and how this story has evolved over the centuries. The casual brutality toward women that lies at the base of many of these tales prodded me to think about the many images of women oppressed or abused or violated that we see today in the news on a daily basis. In the old tale Scheherazade is the lucky one who, through her endless inventiveness, is able to save her life. But there is not much to celebrate here when one thinks that she is spared simply because of her cleverness and ability to keep on entertaining her warped, murderous husband.

Thinking about what a Scheherazade in our own time might be brought to mind some famous examples of women under threat for their lives, for example the "woman in the blue bra" in Tahrir Square, dragged through the streets, severely beaten, humiliated and physically exposed by enraged, violent men. Or the young Iranian student, Neda Agha-Soltan, who was shot to death while attending a peaceful protest in Teheran. Or women routinely attacked and even executed by religious fanatics in any number of countries—India, Pakistan, Afghanistan, wherever. The modern images that come to mind certainly aren’t exclusive to the Middle East—we see examples, if not quite so graphic nonetheless profoundly disturbing, from everywhere in the world including in our own country and even on our own college campuses.

So I was suddenly struck by the idea of a "dramatic symphony" in which the principal character role is taken by the solo violin—and she would be Scheherazade. While not having an actual story line or plot, the symphony follows a set of provocative images: a beautiful young woman with grit and personal power; a pursuit by "true believers;" a love scene (who knows…perhaps her lover is also a woman?); a scene in which she is tried by a court of religious zealots ("Scheherazade and the Men with Beards"), during which the men argue doctrine among themselves and rage and shout at her only to have her calmly respond to their accusations); and a final "escape, flight and sanctuary", which must be the archetypal dream of any woman importuned by a man or men.

I composed the piece specifically for Leila Josefowicz who has been my friend and champion of my music (and many other composers) for nearly fifteen years. Together we’ve performed my Violin Concerto and my concerto for amplified violin, The Dharma at Big Sur, many times. This work is a true collaboration and reflects a creative dialogue that went back and forth for well over a year and that I expect will continue long after the first performance. I find Leila a perfect embodiment of that kind of empowered strength and energy that a modern Scheherazade would possess.

“Like Rimsky-Korsakov before him, [Adams] conjures up a palette of instrumental colors and shading that almost seem to have no precedent.” 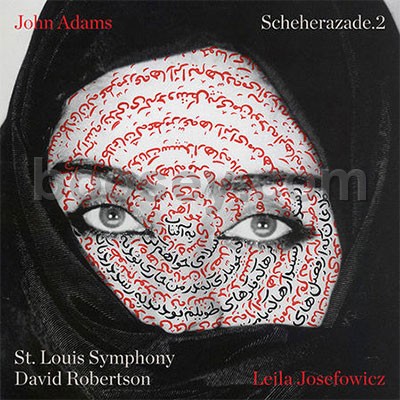 Buy CD from our Online Shop