The euphonium has, for many years, been associated with the world of brass and traditional marching bands rather than that of the symphony orchestra or concert hall. Within brass bands it plays a central role, often being referred to as the cello of the band on account of its similarity in register to its stringed counterpart. In the last five years or so, these perceptions of the instrument have begun to change, largely due to the vision of one man: the young Yorkshire-born player David Childs who has done much to develop for it a new character in fitting with the twenty-first century. A major part of his campaign to win the euphonium new audiences has been to commission new pieces. One of the most important is Karl Jenkins’s Concerto, premiered in July 2009 at the Welsh Proms, Cardiff, by David Childs with the BBC Concert Orchestra conducted by Owain Arwel Hughes.

“Finding major composers willing to write for the instrument is the challenge,” said David Childs in an interview at the time of the premiere. “Karl’s work is very listenable, very virtuosic, typical of his style. I’m sure it will appeal to a broad musical population, which is the audience I’m trying to reach.” The Concerto was commissioned by Euphonium Foundation, an organisation set up by David Childs devoted to developing an understanding of the euphonium.

In bringing the instrument before a wider audience, few composers are more qualified to reach out to music lovers than Swansea-born Karl Jenkins. His music has attracted the kind of attention more often reserved for figures in the pop music business. His album Adiemus - Songs of Sanctuary was used for the 1996 Five Nations Rugby and sold more than a million copies worldwide, reaching the “Top 40”. More recently, works such as The Armed Man: A Mass for Peace and the Requiem have spoken to both choral societies and their audiences in a way that is unique in contemporary music.

The Concerto is in four movements, lasting around twenty-five minutes. The first movement, The Juggler, immediately establishes a sense of fun, graphically bringing to mind both the ease of movement and lolloping suspense of the juggler’s art. The second movement, Romanza, is an unashamedly lyrical outpouring for the soloist, initially accompanied by strings and, later, the full orchestra. The third movement, “It takes two …”, is a sultry tango-like melody with a particularly striking ending where the soloist both sings and plays the euphonium simultaneously. The work ends with A Troika. Tidy!: a galloping rhythm in the orchestra is joined by the soloist in the lowest register of the instrument in a troika (a traditional Russian dance which imitates the prancing of horses). A slow romantic episode briefly interrupts the music’s joie de vivre, out of which the soloist emerges with a cadenza of great brilliance (accompanied by two sleigh bells) leading to the Concerto’s rousing conclusion.

Reproduction Rights
This programme note can be reproduced free of charge in concert programmes with a credit to the author and Boosey & Hawkes. 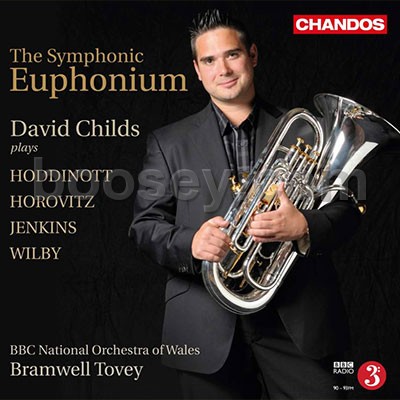 Click here to purchase this CD from our Online Shop