"Though its material is quite different, Eulogy is a kind of appendix to Turnage's viola concerto, On Opened Ground, first performed in Cleveland last year; the mellow, undemonstrative sound world of the accompaniment tends to emphasise the same middle registers as the solo instrument. It all conjures up an autumnal, nostalgic world that touches on a kind of latter-day pastoral, in which the viola sings its own nostalgic songs, poised and quietly eloquent." (Andrew Clements, Guardian, 09.07.2003) 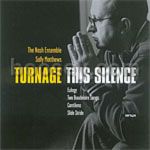