“Present and correct are the Turnage trademarks: thick, bluesy riffs, guttural orchestral textures (there are no violins) and jagged harmonies... however, the piece also revealed a more romantic, even nostalgic side to Turnage that I’ve not heard. Remembering was written after the death of a family friend (son of the jazz guitarist John Scofield) and its keening woodwind lines, particularly in a haunting second movement, and ghosts of baroque forms leaven the instability with consolation.”
The Times

“Remembering was about life as well as death. An energetic, pulsating figure, seesawing from double basses to high brass, ignites the piece. Taut rhythmic patterns and swift melodic motifs in each section suddenly break off and shift to fateful, drum-heavy, climactic sounds. The writing is tonal, buoyant, impassioned. A variety of bells, plus piano, celesta and saxophone, shape the orchestration, and offset the dark string colours.”
The Observer

"Starting with a movement in the composer’s most eruptive and jagged style it continues with music of bouncing ebullience whose wayward lyricism incorporates Turnage’s characteristically vital bluesy inflections. The second movement places sombre, troubled gestures within an atmosphere of stillness and restraint. A scherzo follows, restless and slithery. But it’s in the slow, uneasy finale that the note of inner reflection reaches its most personal and eloquently expressive apogée."
The Guardian 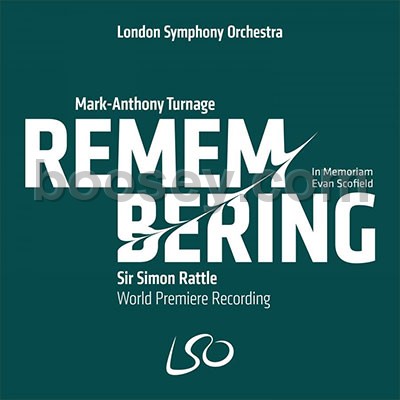