Geysir was a commission for the Britten Sinfonia. It was imagined as a partner to Mozart’s Serenade in B flat (K.361), the ‘Gran Partita’, drawing on the same instrumental forces: pairs of oboes, clarinets, basset horns, bassoons, four horns, and double bass.

Geysir’s relationship to Mozart goes beyond programming convenience. Geysir – the Icelandic word for geyser, from the Old Norse geysa, ‘to gush’ – is the surface emanation of two ideas in the Serenade. The first is the resplendent B flat major chord that opens the ‘Gran Partita’: fulsome homophonic textures, making extravagant and atmospheric use of warm clarinets, basset horns, bassoons, and french horns, are key to the design of Simpson’s piece – though Geysir extends the spread and range of these chords to generate a sound world very much its own.

The second compositional seed comes from an especially numinous moment in Mozart: variation five of the Serenade’s sixth movement. A quartet of clarinets plays various iterations of a spread B flat major chord, pianissimo, with horns underneath; above this an oboe sings a plaintive and lightly-ornamented melody. These murmuring, overlapping figures are where Simpson finds the ‘bubbling’ clarinets at the outset of Geysir, and they shape its further melodic impulses. Texture itself is an idée fixe in Geysir, summoning a musical landscape that is organic, intuitive, even atavistic.

The title’s volcanic logic manifests in different ways. Its textural organisation combines a pulsing underlay of lugubrious French and basset horns, thickened by oozing bassoons and double bass, with lyrical eruptions from pairs of clarinets and oboes. The denser lower registers of the piece slacken and quicken across uneven syncopated rhythms like flows of magma or shifting tectonic plates, supplying energy for outbursts from clarinets and oboes above, as if a superheated column of steam and ash has breached the surface of the musical crust.

This is evident in the most intensely pressurised climax. The accompanying lower instruments pulse faster and surge upwards into loud blocks of sound that cover the ensemble’s entire range, cracking open to allow a screaming oboe through, like an old-fashioned kettle at a furious boil; the work’s tremors gradually subside and the lower instruments cool to a more dormant state, the piece ending more or less as it began. Simpson’s instrumental ensemble itself represents another canny link between title and timbre. Clarinets, oboes, and horns have a similar mechanism to volcanic eruptions themselves, as pressurised air is forced through narrow pathways to expel sound, breath, and moisture, in ways that can be explosive, spectacular, sinuous, or languid. 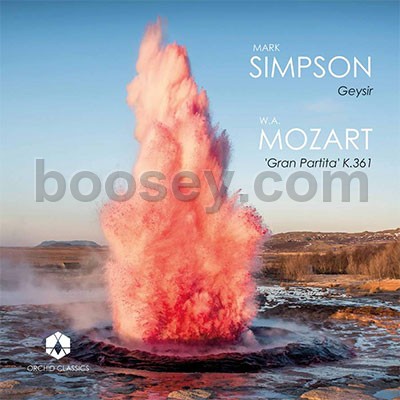