Motor City Triptych (2000) is part of a series of compositions inspired by American places and spaces, including Sunset Strip (1999), Route 66 (1998), Niagara Falls (1997), Flamingo (1991) and Blue Like an Orange (1987). Motor City Triptych is a car trip through the sounds and rhythms that I experience when I drive through the streets and boulevards of Detroit, Michigan.

The triptych in my title refers not only to an iconic art object in three parts, but also suggests a "Triptik" from the American Automobile Association: a fold-out map to mark a road trip to a destination. My musical travelogue is a concerto for orchestra divided into three movements, entitled "Motown Mondays", "Pedal-to-the-Metal" and "Rosa Parks Boulevard".

I.
The inspiration for "Motown Mondays" is a series of legendary performances by Motown artists on nine consecutive Mondays during the summer of 1966, at The Roostertail nightclub in downtown Detroit. These musicians became legends when they were recorded by Motown Records: The Four Tops, The Supremes, Junior Walker and the All Stars, Marvin Gaye, Martha Reeves & The Vandellas, Smokey Robinson & The Miracles, The Marvelettes and The Temptations.

Motown Records was formed in Detroit by Berry Gordy, Jr., an Afro-American producer and songwriter. During the sixties Motown became one of the most successful and influential recording companies in the history of American pop music. The distinctive Motown sound combined rhythm and blues, gospel, soul, funk, and rock, often accompanied by a large studio orchestra that included members of the Detroit Symphony Orchestra string section.

I played many Motown songs on my Hammond Organ in Cedar Rapids, Iowa, when I formed a band in the late sixties called "The Soul Company." What I loved about Motown music was its rhythmic energy, the inventive use of vocal harmonies, and its sophisticated arrangements.

In "Motown Mondays" I imagine an exotic world of harmonies and rhythms that might have been heard performed by Motown artists on a Monday night at The Roostertail Club.

Like a series of Motown ensembles, I divide the orchestra into various solos, duets, trios and quartets, leading up to an elaborate funky fugue in the coda. To evoke the falsetto voices, low bass rumblings, and lush gospel harmonies of Motown singers, I often have the instruments of the orchestra play in their extreme high and low registers.

In addition to soaring violin melodies, we hear the string section strumming pizzicato chords like a rhythm and blues guitar. Descending major seventh chords are heard in the woodwinds, punctuated by triangles and a harp playing ostinatos. Antiphonally placed percussion instruments, such as claves and cymbals, provide lively polyrhythmic counterpoint. In the composition I also incorporate and superimpose different time signatures (7/8 and 4/4 time), like a record spinning out of control on its turntable.

II.
"Pedal-to-the-Metal" is music in motion, where I put the performer and the listener in the driver's seat. The movement is a high-speed drive along Highway 12 (Michigan Avenue) in Detroit, the automobile capital of the world. Built in the 1930s, this two-lane road runs from downtown Detroit, through adjoining suburbs such as Dearborn, to the Big Three automotive plants of Ford, General Motors and Chrysler.

In "Pedal-to-the-Metal" I create a musical landscape for a journey that takes us along never-ending neon signs, billboards, night clubs, 1950s motor inns, diners, bars, Middle Eastern restaurants and cafes, antique shops, used car lots, and gas stations. I frame and re-frame imaginary sounds from these worlds, as they pass by in fragmented orchestrations, melodies, and counterpoints. I alternate between featuring the percussion and string sections, to suggest the movement of cars from the factory assembly line to the highway's double lane.

III.
"Rosa Parks Boulevard" pays tribute to the woman who, in 1955, helped set in motion the modern civil rights movement by her refusal to move to the back of the bus in Montgomery, Alabama. In 1957, she moved to Detroit, Michigan, where she has lived ever since. One of the many honors bestowed upon Rosa Parks is a downtown Detroit boulevard bearing her name.

In the fall of 1999, I had the pleasure of attending a Sunday church service with Parks at the St. Matthew African Methodist Episcopal Church in Detroit. For more than four decades she has attended this modest church with the motto "The Church Where Everybody Is Somebody" hand-painted over its entrance. During the four-hour service, I joined Parks and the congregation in singing various gospel hymns and listening to the preacher's inspired oratory.

After the service, Parks told me her favorite piece of music was the traditional African-American spiritual, Oh Freedom. Since her association with the Reverend Martin Luther King Jr. in the fifties, Parks has viewed the words spoken by African-American preachers as a source of strength. Preachers also inspired African-American poet James Weldon Johnson. In the preface to God's Trombones, his 1927 volume of poetry, Johnson describes how the preacher "strode the pulpit up and down in what was actually a very rhythmic dance, and he brought into play the full gamut of his wonderful voice, a voice-what shall I say? Not of an organ or a trumpet, but rather of a trombone, the instrument possessing above all others the power to express the wide and varied range of emotions encompassed by the human voice - and with greater amplitude. He intoned, he moaned, he pleaded, he blared, he crashed, he thundered. I sat fascinated; and more, I was, perhaps against my will, deeply moved; the emotional effect upon me was irresistible."

"Rosa Parks Boulevard" features the trombone section, echoing the voices of generations of African-American preachers in Detroit and across the country. Fragments of the melody Oh Freedom are played in musical canons by the trombones, which I associate with the preacher. I also introduce a musical motive, which I associate with Parks, first heard in the woodwinds and vibraphone. These lyrical sections alternate with a turbulent bus ride, evoked by atonal polyrhythms in the trumpets, horns and non-pitched percussion. The recurrence of ominous beating in the bass drum reminds us that while progress was made in civil rights in the twentieth century, there is still much to be done in the twenty-first century. 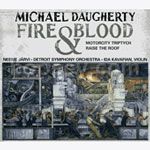