Here [enclosed] is a piece about the act or process of enclosing, the enclosure of sound or an individual. This enclosing takes place in the large structure of the work but also in details like timbre and individual instrumental lines. The soundtrack forms boundaries around the instrumental groups in the orchestra. Gradually the orchestra becomes more and more entangled with these boundaries until, in the climax of the piece, the enclosing is complete.
The piece is constructed from very little musical material; a sequence of eleven chords forms the harmonic foundation of the entire work. The soundtrack is based upon electronic manipulations of recordings made of the orchestra.
Here [enclosed] is the opening part of the Here Trilogy; Here [enclosed], Here [in circles], Here [to be found]. The central idea in this cycle is the relationship between the individual and his/her environment.
Here [enclosed] is commissioned by the Dutch Fund for the Creation of Music and the Zaterdag Matinee and written for the Radio Chamber Orchestra and Peter Eötvös.
© 2004 Michel van der Aa

"'Enclosed by the sound of noise'. Claustrophobia played a very intriguing role in the Matinee in the Amsterdam Concertgebouw. It was the subject of the new composition by Michel van der Aa... while the phrases expand and the cracking and hissing gets louder, the chamber orchestra is gradually enclosed by noises on the soundtrack. Van der Aa also shows a theatrical side. On stage is a plexiglass cabin raised like an upright coffin that reveals its contents at the end of the work. The ending is strong, as the solo violin, as if in fear of death, doesn’t dare to play any further and keeps on repeating the same note." (Ernst Vermeulen, NRC Handelsblad, 13 Apr 2004)

"During Here [enclosed] a black plexiglass monolith was placed on stage, as impeccable as Van der Aa’s music; a stone guest with which the composer referred to the ‘self’ and the ‘other’, and to the divided sense of loneliness which pervades his whole oeuvre." (Anthony Fiumara, Trouw, 13 Apr 2004) 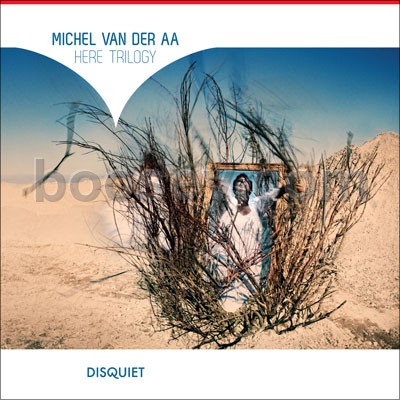