Hysteresis refers to the way in which a system depends both on its current environment, and its past. That is, the idea that non-living things can have a sort of ‘memory’ of previous states, which they carry into their present. It was originally used in material science – to describe, for example, how certain metals become magnetized when brought into contact with a magnetic field, and stay magnetized after that field has been removed.

In his clarinet concerto – his first major work for the instrument – Michel van der Aa extends this idea into more speculative realms: can musical material (note sequences, rhythms, chords) retain some ‘memory’ of itself even after it has been worked with? Is it identifiably the same stuff, does it behave similarly, even when the magnet has been taken away? Indeed, are musical notes ‘material’ in the same way that a strip of iron is?

By combining acoustic instruments with recorded and digitally processed mirrors of themselves – sometimes just as a soundtrack, sometimes, as in his cello concerto Up-close and his opera Sunken Garden, also as video – Van der Aa is familiar with thinking of music in terms of physical stuff. His works are full of the sounds and procedures of music editing and sound design; loops and layers, clicks and cuts. Music may only be intangible soundwaves or digital bits, but software and compositional technique mean it can be virtually stretched, cut, squashed and transformed just as much as a piece of clay.

Hysteresis introduces the idea of musical memory from its very first sound – the nostalgia-inducing pop and crackle of static from a record player (played via electronic soundtrack). At the same time the percussionist rubs sandpaper in circles over a table surface, imitating the noise and movement of the spinning record. In spite of its digital sheen, Van der Aa’s music stays in touch with the analogue and the physical roots of music making.

As the clarinet unfolds a line of wide leaps and slow phrases, occasional notes and intervals reverberate back from the soundtrack. Live tones morph into digitally manipulated chords. The transformations continue to bounce between instruments and media types: the vinyl pops become percussion taps, which in turn become stuttering strings and digital clicks. In the shorter, second movement, analogue synthesiser sounds (used for the first time by the composer) bubble out of a complex rhythmic texture and another transformation is hinted at, as the soundworld briefly flips from angular atonality towards the fringes of acid house. The point is less the identifiable moments on such a trajectory, than the multi-dimensional space of interlocking sounds and suggestions that is opened up.
© Tim Rutherford-Johnson

"We hear a clarinet concerto ... bristling with life. Van der Aa’s characteristic layers of sound – a recorded soundtrack, the static from an old record player, analogue synthesiser sounds – could almost be swept away in favour of the virtuoso writing Hysteresis gives to the solo clarinet and small orchestra. Mark van de Wiel made a spine-tingling job of it as the music raced to its frenetic conclusion." (Richard Fairman, Financial Times, 01 May 2014)

"The solo line, played with authority and verve by van der Wiel, leaps and capers through every conceivable virtuoso loop, its fast-and-furious quality rarely toning down into anything gentler or more obviously lyrical; it made a thrilling display piece nevertheless, with the composer's inventive percussion writing and use of a soundtrack adding distinctive perspectives to the accompaniment." (George Hall, Guardian, 02 May 2014)

"... the tape soundtrack pulsates inventively. There is real interaction. Mark van de Wiel’s virtuosity was stretched to the limit but to potent effect." (Barry Millington, Evening Standard, 01 May 2014) 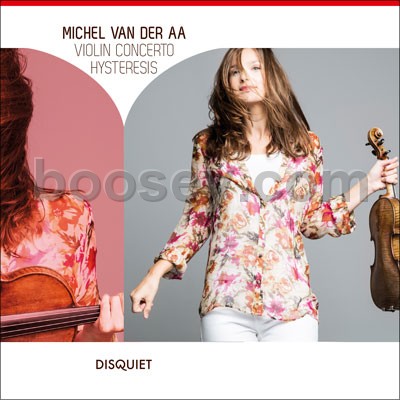