"Sol Gabetta and the Amsterdam Sinfonietta played the evocative, lyrical score, which made atmospheric use of electronics, at one side of the stage. On the other, a silent film of an older woman running through woods to an empty house offered a puzzling narrative. Gabetta and woman at times echoed each other. Eventually they find the same old-fashioned standard lamp and, as it were, everything is illuminated.
It was a richly intriguing affair. My inability precisely to say how Up-Close’s recipe of resonance and mystery worked is itself a form of praise." (Fiona Maddocks, The Observer, 27 Mar 2011)

"Written for Argentinian cellist Sol Gabetta, this hauntingly beautiful work is among Van der Aa’s finest. Gabetta, in a print frock, sits among the black-clad orchestra, spinning out a rapturous song without words, while on screen a similarly dressed older woman creeps furtively to a disused house to use an old, unspecified piece of electronic equipment.
Black-out screens cover the windows and the machine communicates in code. The woman may be reliving wartime memories, possibly as a member of the Dutch resistance. But we will never know for certain. Being ‘up-close’ can never give us the bigger picture, and we are left with a mystery that continues to resonate after the music has faded." (Tim Ashley, The Guardian, 21 Mar 2011)

"A work that captivates from beginning to end" (Thomas Anderberg, Dagens Nyheter, 14 Mar 2011)

"A fearful woman in the film, who by the look of it is doing meaningless work in an abandoned house in the woods, soon merges with the Sol Gabetta, the Argentinean cellist playing on the stage who represents the woman in her younger years. Film and live images intermingle poetically, and Van der Aa’s wonderful music does the rest. Van der Aa retains all the elements of concerto form, but has the piece begin with the solo cadenza, in a magnificent performance by the lithe-limbed Gabetta. When music, electronics and string orchestra then suddenly converge, the magic that you so often hear in Van der Aa’s music is there again. A fine addition." (Peter van der Lint, Trouw, 18 Mar 2011)

"Michel van der Aa has invented a form of music theatre that works wonderfully because he is not rooted in traditional opera theatre, but rather combines film and snatches from evocative art videos with music. ‘Up-close’ deals with fundamental human loneliness, telling it entirely in tautly stylised images in which an elderly woman performs ritual acts that do not literally specify anything, but in their successive projection on the screen create a reality that evokes the sensation of watching your own nightmare. Van der Aa unerringly envisages images and actions, arousing associations that make painfully clear that we are all locked up very much alone in our own little self.
Image and music are woven into a coherent whole in a perfectly timed, tightly directed play of varied repetitions. Its powerful charge derives from the fact that it is all structured so unsentimentally and in an abstractly musical way. What you see and hear interlocks secretively and with success because ultimately it is all put together with an imagination that is purely musical. It works because Van der Aa is an unequalled master at creating a high-tech whole from barely profiled gestures, which gets its meaning from the interconnection of all these elements. It makes for a very contemporary form of intelligent but nevertheless accessible music theatre." (Roeland Hazendonk, Parool, 18 Mar 2011)

"Up-close has superb ideas, such as a magical woods scene in which the trees are draped in rustling scraps of aluminium foil. Cellist Gabetta has an impressive role, not least as a soloist but also as an actress. Film, music and acting often merge impressively, but despite that it remains on the whole a cello concerto, with explosive moments as well as melancholy lyricism. At the end the Luxembourg audience keeps clapping. ‘Now we really know Van der Aa,’ says a well turned-out woman to her husband." (Jochem Valkenburg, NRC, 14 Mar 2011)

"On film we see an elderly woman wandering across a stage devoid of musicians, while soloist Sol Gabetta performs live to one side: the music (and movement in moments) sometimes separate, sometimes interacting with the film. Gabetta tackles the score and its often riveting urgency with a drama that becomes as much physical as musical, an effect enhanced by her integration into the direction of the entire piece. It is a striking visual effect that lingers longest: Gabetta leaping up, propelled forward, in unison with the actor on screen. I think Up-close would benefit from being even more so, a greater proximity creating an even stronger sense of absorption into this unsettlingly strange stage world of broken barriers and inverted norms." (Martin Cullingford, Gramophone, 30 Mar 2011) 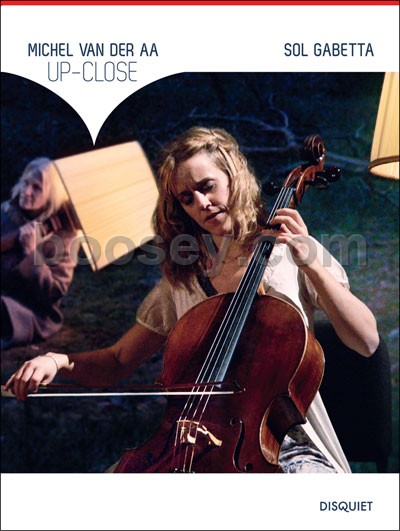