Co-commissioned by the BBC Proms and the Philadelphia Orchestra, Quickening sets poetry by the composer’s frequent collaborator Michael Symmons Roberts. Exploring themes of birth, new life and new impulses, the work’s three-fold vocal layers juxtapose mysticism and hyper-realism, painting a canvas at one turn intimate and private, at the next epic and celebratory. Despite some special effects, the writing for the main chorus is well within the grasp of most amateur groups, while that for the ‘unborn’ children’s choir - ideally spatially disembodied from the concert platform – has been hailed as some of the most distinguished since that of Britten.

Quickening is a large-scale, complex work that is fascinating in its conception and is undoubtedly a major challenge to any group wanting to perform it. MacMillan has stated that "I have specifically written this piece so that it will continue to be performed by amateur choirs. I suppose, in that sense, it should not be technically demanding, although there are things asked of the singers that are quite unusual like the Glossalalia, like the very free, rhythmical approach to singing like that with a strange text, a kind of nonsense text, though it is based on a kind of adaptation of old Aramaic".

The work is about birth, new life, new impulses, but, as MacMillan says, it also has its dark side out of which hope is glimpsed. It is powerfully imaginative and is laid out over four movements, deploying three distinct vocal layers: a small ensemble of soloists and a symphonic chorus on the stage, plus a boys choir with chamber organ support ideally spatially disembodied from the other performers.

A choir has to be confident to take on the kind of challenges posed by this work. The difficulty isn’t always the actual notes but rather the context in which they are placed. However, given the large-scale nature of the work and the orchestral resources required (including a large percussion section with an exotic array of instruments) it is likely that any group taking it on will have the necessary expertise. In all the performances to date it has proved to be approachable and rewarding.

Demands include low-range basses who are divisi à 4 in the second movement singing a low D flat/E flat drone (together) for several pages. The ‘Glossalalia’ (nonsense texts) take some absorbing (and rehearsal) but add a major mystical dimension to the work. Detailed attention is needed on some cluster effects, though these are assembled melodically, then sustained. There is also some exciting unpitched (approximate pitch) rhythmic singing in the last movement, though some of the dancing patterns are doubled within the orchestra and are not as difficult to co-ordinate in performance as might appear.

Overall, MacMillan’s ear for sonority (choral and orchestral) makes this work more practical to rehearse than it looks to be in the score. The 3rd movement is a good example where voice parts are well led by the orchestra and are genuinely straightforward (even though the boys’ choir is given some high tessitura singing). The triumphant, chorale-like conclusion of the last movement is thrilling and is some of the most celebratory in MacMillan’s choral output, before a fade out with distant boys voices.

"Using a richly allusive libretto by Michael Symmons Roberts, Quickening deals with the the concept of birth in all its explosive, miraculous, life-changing and occasionally life-threatening forms... MacMillan grounds it in sonorities of gripping viscerality... His great gift is to make a complex but white-hot passion immediately coherent and persuasive."
The Times

"MacMillan writes a skilful, archaic counterpoint for the Hilliards, with only the lightest accompaniment... the final climax of this virtual oratorio is a rampage of choral-orchestral joy."
Sunday Times 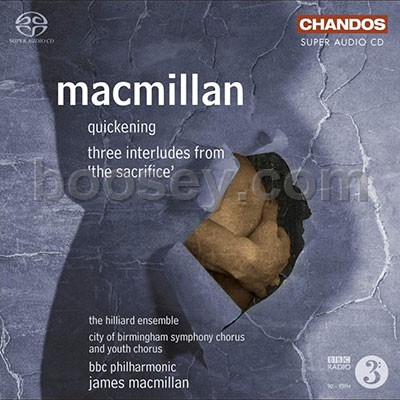 
News stories for this title:
James MacMillan: Preview of Quickening at Proms