The idea that any sound may be used as part of a piece of music as been in the air during much of the 20th Century. From the use of taxi horns in Gershwin’s An American in Paris through Varese’s sirens, Antheil’s airplane propeller, Cage’s radio, and rock and roll’s use of all of the above and more starting at least in the 1970s, and more recently in rap music, the desire to include everyday sounds in music has been growing. The sampling keyboard now makes this a practical reality. In City Life not only samples of speech but also car horns, door slam, air brakes, subway chimes, pile driver, car alarms, heartbeats, boat horns, buoys, fire and police sirens are part of the fabric of the piece.

In contrast to my earlier Different Trains (1988) and The Cave (1993) the prerecorded sounds here are played live in performance on two sampling keyboards. There is no tape used in performance. This brings back the usual small flexibility of tempo that is hallmark of live performance. It also extends the idea of prepared piano since the sampling keyboards are ‘loaded’ with sounds, many recorded by myself in New York City. These different non-musical sounds also suggest certain instrumental responses. Thus woodwinds for car horns, bass drum for door slams, cymbal for air brakes, clarinets for boat horns and several different instrumental doublings for speech melodies.

City Life is scored for 2 flutes, 2 oboes, 2 clarinets, 2 pianos, 2 samplers, 3 (or 4) percussion and string quartet. Like several earlier works, it is an arch form A-B-C-B-A. The first and last movements use speech samples as part of the musical fabric and both feel like ‘fast’ movements though the actual tempo of the first is moderate and the fairly rapid tempo of the last movement is harder to perceive because of the many sustained sounds. The harmonies leading to E-flat or C minor in the chorale that opens and closes the first movement reappear in the fifth movement in a more dissonant voicing and finally resolve to C minor which then ambiguously ends as either a C dominant or C minor chord. The second and fourth movements do not use any speech whatsoever. Instead, each uses a rhythmic sample that determines the tempo. In the second it is a pile driver, in the fourth, heartbeats. Both start slow and increase speed. In the second this is only because the pile driver moves from quarter notes, to eighths and then to triplets. In the fourth movement the heartbeats gradually get faster in each of the four sections of the movement. Both movements are harmonically based on the same cycle of four dominant chords. The third and central movement begins with only speech samples played by the two sampler players. When this duet has been fully built up, the rest of the strings, winds and percussion enter to double the pitches and rhythms of the interlocking speech samples. This central movement may well remind listeners of my early tape pieces It’s Gonna Rain (1965) and Come Out (1966).

City Life is tripartite commission from the Ensemble Modern, the London Sinfonietta, and the Ensemble Intercontemporain. It is approximately 24 minutes in duration. The five movements are as follow:

The speech samples in the 5th movement are: 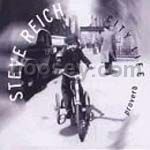