Starting in 1971 my ensemble began touring Europe. We would carry 2000 pounds of loudspeakers, amplifiers, drums, marimbas, glockenspiels, electric organs, microphones, and so on. In 1972 I composed Clapping Music to create a piece of music that would need no instruments beyond the human body. At first I thought it would be a phase piece, but this proved inappropriate since it introduced a difficulty (phasing) that seemed inconsistent with such a simple way of producing sound. The solution was to have one part remain fixed, repeating the pattern throughout, while the second moves abruptly, after a number of repeats, from unison to one beat ahead, and so on, until it is back in unison with the first. It can thus be difficult to hear that the second performer is in fact always playing the same pattern as the first, though starting in a different place. 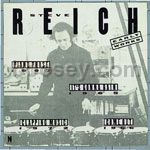