Dance Patterns (2002) was composed for choreographer Anne Teresa de Keersmaeker and filmmaker Thierry de Mey. De Mey had completed an hour-long film of de Keersmaeker's choreography entitled Counterphrases and asked several composers to write a five- or six-minute piece for a completed section of the film. The pieces were performed live, while the film was being shown, by the Ictus Ensemble, who commissioned all the music. Dance Patterns is scored for two pianos, two vibraphones, and two xylophones, and is about six minutes in duration. 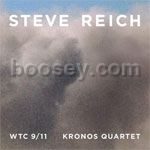