Different Trains, for String Quartet and pre-recorded performance tape, begins a new way of composing that has its roots in my early tape pieces It’s Gonna Rain (1965) and Come Out (1966). The basic idea is that carefully chosen speech recordings generate the musical materials for musical instruments.

The idea for the piece came from my childhood. When I was one year old my parents separated. My mother moved to Los Angeles and my father stayed in New York. Since they arranged divided custody, I travelled back and forth by train frequently between New York and Los Angeles from 1939 to 1942 accompanied by my governess. While the trips were exciting and romantic at the time I now look back and think that, if I had been in Europe during this period, as a Jew I would have had to ride very different trains. With this in mind I wanted to make a piece that would accurately reflect the whole situation. In order to prepare the tape I did the following:

In order to combine the taped speech with the string instruments I selected small speech samples that are more or less clearly pitched and then notated them as accurately as possible in musical notation.

The strings then literally imitate that speech melody. The speech samples as well as the train sounds were transferred to tape with the use of sampling keyboards and a computer. Three separate string quartets are also added to the pre-recorded tape and the final live quartet part is added in performance.

Different Trains is in three movements (played without pause), although that term is stretched here since tempos change frequently in each movement. They are:

The piece thus presents both a documentary and a musical reality and begins a new musical direction. It is a direction that I expect will lead to a new kind of documentary music video theatre in the not too distant future. 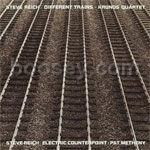