Four Organs is composed exclusively of the gradual augmentation (lengthening) of individual tones within a single (dominant 11th) chord. The tones within the chord gradually extend out like a sort of horizontal bar graph in time. As the chord stretches out, slowly resolving to the tonic A and then gradually changing back to the dominant E, a sort of slow-motion music is created. The maracas lay down a steady time grid of even eighth-notes throughout, enabling the performers to play together while mentally counting up to as much as 256 beats on a given cycle of sustained tones.


Four Organs is the only piece I am aware of that is composed exclusively of the gradual augmentation of individual tones within a single chord. From the beginning to the end there are no changes of pitch or timbre; all changes are rhythmic and simply consist of gradually increasing durations. This process of augmentation was suggested by the enormous elongation of individual tenor notes in Organum as composed by Perotin and others in the twelfth and thirteenth centuries in Paris at Notre Dame Cathedral. Tenor notes that in the original chant may have been equivalent to our quarter- or half-notes can take several pages of tied whole-notes when augmented by Perotin or Leonin.


Four Organs was composed in January 1970. It was first performed at the Guggenheim Museum in New York City by myself and members of my own ensemble later that same year. It also turned out to be one of my first pieces to be heard by a large concert-going public when Michael Tilson Thomas invited me to perform it with him and members of the Boston Symphony Orchestra in Boston in 1971 and at Carnegie Hall in 1973, where it provoked a riot. 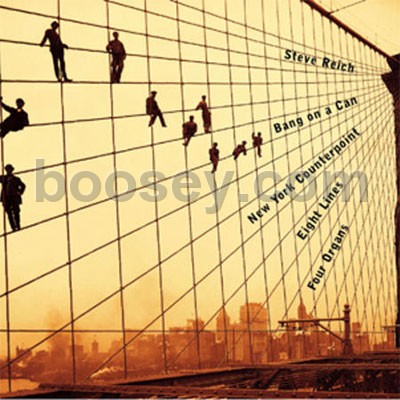