Quartet, when mentioned in the context of concert music, is generally assumed to mean string quartet. In my case, the quartet that has played a central role in many of my pieces (besides the string quartet) is that of two pianos and two percussion. It appears like that or in expanded form with more pianos or more percussion in The Desert Music, Sextet, Three Movements, The Four Sections, The Cave, Dance Patterns, Three Tales, You Are (Variations), Variations for Vibes, Pianos and Strings, Daniel Variations, Double Sextet, and Radio Rewrite. In Quartet, there is just this group alone: two vibes and two pianos.


The piece is one of the more complex I have composed. It frequently changes key and often breaks off continuity to pause or take up new material. Though the parts are not unduly difficult, it calls for a high level of ensemble virtuosity.


The form is one familiar throughout history: fast, slow, fast, played without pause. The slow movement introduces harmonies not usually found in my music.


The piece is dedicated to Colin Currie, a percussionist who has broken the mold by maintaining his solo career with orchestras and recitals and also, quite amazingly, by founding the Colin Currie Group which plays whatever ensemble music he believes in. I salute him and hope others will take note.

"Written for two vibraphones and two pianos, the 17-minute Quartet is Mr. Reich’s first piece for those two instruments alone, and the combination is ingenious and seductive, and deployed with subtle craftsmanship... The work has an alert, jazzy, urban character — suavely melancholy in its nocturnal slower middle section, with angular yet genial rhythms that evoke Broadway."
New York Times

"Relaxed, intimate and bittersweet in mood, it’s a chamber work in essence, written with the kind of egalitarianism between the musicians that we often find in string quartets, as the emphasis shuttles fluidly from one player, or combination of players, to the next…"
The Guardian 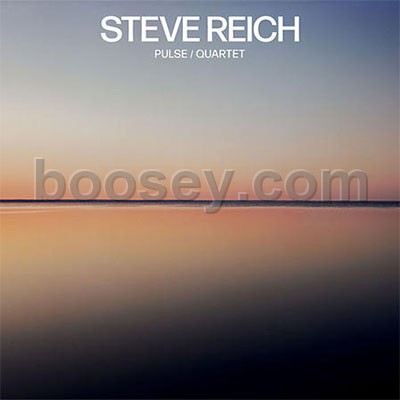