Over the years composers have used pre-existing music (folk or classical) as material for new pieces of their own. This was particularly notable from the beginning of the 15th to the end of the 17th century when over forty settings of the Mass using the tune L'homme armé as its point of departure were written by composers Dufay, Ockeghem, Josquin des Pres, and Palestrina among others. L'homme armé was a popular secular song, yet writing a Mass was similar in scope then to writing a symphony in the classical or romantic period. Much later in the 19th century, Brahms wrote Variations on a Theme of Haydn and in the 20th century we find Stravinsky reworking the music of Pergolesi’s for his own Pulcinella. Radio Rewrite, along with Proverb (Perotin) and Finishing the Hat—Two Pianos (Sondheim), is my modest contribution to this genre.

Now, in the early 21st century, we live in an age of remixes where musicians take audio samples of other music and remix them into audio of their own. Being a composer who works with musical notation I chose to reference two songs from the rock group Radiohead for an ensemble of musicians playing non rock instruments. The two songs chosen were Everything in its Right Place and Jigsaw Falling into Place. The story is as follows:

In September 2010 I was in Krakow for a festival of my music. One of the featured performers was Jonny Greenwood of Radiohead who had prepared all the backing tracks for my piece, Electric Counterpoint and then played electric guitar live against those tracks in concert. It was a great performance and we began talking. I found his background as a violist and his present active role as a composer extremely interesting when added to his major role in such an important and innovative rock group. Even Festival director Filip Berkowitz suggested I listen to Radiohead. When I returned home I made it a point to go online and listen to their music and the two songs mentioned above stuck in my head.

It was not my intention to make anything like ‘variations’ on these songs, but rather to draw on their harmonies and sometimes melodic fragments and work them into my own piece. This is what I have done. As to actually hearing the original songs, the truth is—sometimes you hear them and sometimes you don’t.

Radio Rewrite is in five movements played without pause. The first, third and fifth are fast and based on ‘Jigsaw’ and the second and fourth are slow and based on ‘Everything’. It was completed in August 2012.

"This is not so much a rewrite as a reimagining in Reich’s hyper-real style; instantly accessible, instantly enjoyable. The two vibraphones lay a pearlescent luminosity over the insistent rhythm of the faster movements (based on Jigsaw Falling into Place), while the two slow movements (drawn from Everything in Its Right Place) are content to move from one block chord to another, enjoying the sensation of the progression while sprinkling a duet for woodwind over the top."
The Observer

"Steve Reich proved he’s both achingly hip and a grand old man… His Radio Rewrite referred to two Radiohead songs, but it was a long way from being a ‘cover version’ or arrangement… It was a fine display of compositional mastery, which had nothing to do with remix culture, and everything to do with old-fashioned virtues of harmony and counterpoint."
Daily Telegraph 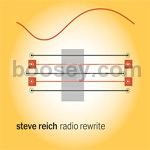