Six Marimbas, composed in 1986, is a rescoring for marimbas of my earlier Six Pianos (1973). The idea to rescore came from my friend, the percussionist James Preiss, who has been a member of my ensemble since 1971 and also contributed the hand and mallet alterations that are used in this score.


The piece begins with three marimbas playing the same eight beat rhythmic pattern, but with different notes for each marimba. One of the other marimbas begins to gradually build up the exact pattern of one of the marimbas already playing by putting the notes of the fifth beat on the seventh beat, then putting the notes of the first beat on the third beat, and so on, reconstructing the same pattern with the same notes, but two beats out of phase. When this canonic relationship has been fully constructed, the two other marimbas double some of the many melodic patterns resulting from this four marimba relationship. By gradually increasing their volume they bring these resulting patterns up to the surface of the music; then, by lowering the volume they slowly return them to the overall contrapuntal web, in which the listener can hear them continuing along with many others in the ongoing four marimba relationship.


This process of rhythmic construction followed by doubling the resulting patterns is then continued in the three sections of the piece that are marked off by changes of mode and gradually higher position on the marimba, the first in D-flat major, the second in E-flat dorian, and the third in B-flat natural minor. 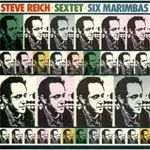