Six Pianos (1973) grew out of the idea I had to do a piece for all the pianos in a pianos store. The piece which actually resulted is a bit more modest in scope since too many pianos (especially if they are large grands) can begin to sound thick and unmanageable. Using six smaller grands made it possible to play the fast, rhythmically intricate kind of music I am drawn to while at the same time allowing the players to be physically close together so as to hear each other clearly.

The piece begins with four pianists all playing the same eight-beat rhythmic pattern, but with different notes. The other two pianist then begin in unison to gradually build up the exact pattern of one of the pianists already playing by putting the notes of his fifth eight-note on the seventh eight-note of their measure, then his first on their third, and so on until they have constructed the same pattern with the same notes, but two eighth-notes out of phrase. This is the same process of substituting beats for rests as appears for the first time in Drumming, but here, instead of the process happening by itself, it happens against another performer (or performers) already playing that pattern in another rhythmic position. The end result is that a pattern played against itself but one or more beats out of phase. Though this result is similar to many older pieces of mine, the process of arriving at that result is new. Instead of slow shifts of phase, there is percussive build up of beats in place of rests. The use of pianos here is more like the sets of tuned drums.


When these phase relationships have been fully constructed, one or two other pianists then double some of the many melodic patterns resulting from this four or five piano relationship. By gradually increasing the volume of these resulting patterns they bring them to the surface of the music, and by gradually fading out enable the listener to hear these patterns, and hopefully many others, pre-existing in the ongoing four or five piano relationship. The decisions as to which resulting patterns were most musical, and what their order would be, were made by James Preiss, Steve Chambers and myself during rehearsals.


This process of rhythmic construction followed by doubling the resulting patterns is then continued in three sections marked of by changes in mode, key, and gradually higher position on the keyboard, the first being in D major, the second in E dorian, and the third in B natural minor. 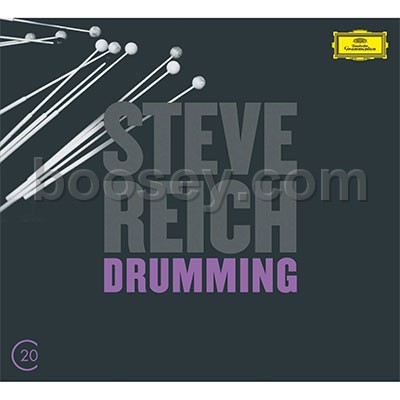