(ALL instruments amplified except crotales)

The chamber version is scored for four women’s voices (one high soprano, two lyric sopranos, and one alto), piccolo, flute, oboe, cor anglais, two clarinets, six percussion (playing small tuned tambourines with no jingles, clapping, maracas, marimba, vibraphone, and crotales), two electric organs, two violins, viola, cello, and bass. The voices, winds, and strings are amplified in performance. In the orchestral version, there are full strings and winds with amplification for the voices only.

The first text begins as a solo with drum and clapping accompaniment only. It is repeated with clarinet doubling the voice and with a second drum and clap in canon with the first. It then appears in two-voice canon, and at last the strings enter with long-held harmonies. At this point all four voices—supported by a single maraca, doubled by two electric organs, and harmonized by the strings—sing four 4-part canons on each of the four verses of the first text. When these are competed, the solo voice restates the original complete melody with all drums and full string harmonization.

The second text begins immediately after a short drum transition. Here, the three verses of text are presented in two- or three-voice harmony in a homophonic texture. Sometimes the voices are replaced by the cor anglais and clarinet or by the drums and clapping. Soon the melodic lines begin augmenting (or lengthening) and then adding melismas. The effect is of a melodic line growing longer and more ornate.

After a pause, the third text begins in a slower tempo and with the percussion changed to a marimba and vibraphone. The text is presented as a duet first between two and then all four voices.

The fourth and final text resumes the original tempo and key signature, and combines techniques used in the preceding three movements. It is, in effect, a recapitulation of the entire piece which then, in a coda based solely on the word halleluyah, extends the music to its largest instrumental forces and its harmonic conclusion. This last movement affirms the key of D major as the basic tonal center of the work after considerable harmonic ambiguity.

The tambourines without jingles are perhaps similar to the small drum called “tof” in Hebrew in Psalm 150 and several other places in the Biblical text. Hand clapping as well as rattles were also commonly used throughout the Middle East in the Biblical period, as were small, pitched cymbals. Beyond this there is no musicological content to Tehillim. No Jewish themes were used for any of the melodic materials. One of the reasons I chose to set Psalms as opposed to parts of the Torah or Prophets is that the oral tradition among Jews in the West for singing Psalms has been lost. (It has been maintained by Yemenite Jews.) This meant that I was free to compose the melodies for Tehillim without a living oral tradition to either imitate or ignore.

In contrast to most of my earlier work, Tehillim is not composed of short repeating patterns. Though an entire melody may be repeated either as the subject of a canon or variation this is actually closer to what one finds throughout the history of Western music. While the four-part canons in the first and last movements may well remind some listeners of my early tape pieces It’s Gonna Rain and Come Out, which are composed of short spoken phrases repeated over and over again in close canon, Tehillim will probably strike most listeners as quite different from my earlier works. There is no fixed meter or metric pattern in Tehillim as there is in my earlier music.

The rhythm of the music here comes directly from the rhythm of the Hebrew text and is consequently in flexible changing meters. This is the first time I have set a text to music since my student days and the result is a piece based on melody in the basic sense of that word. The use of extended melodies, imitative counterpoint, functional harmony, and full orchestration may well suggest renewed interest in Classical or, more accurately, Baroque and earlier Western musical practice. The non-vibrato, non-operatic vocal production will also remind listeners of Western music prior to 1750. However, the overall sound of Tehillim—and in particular the intricately interlocking percussion writing that, together with the text, forms the basis of the entire work—marks this music as unique by introducing a basic musical element that one does not find in earlier Western practice including the music of this century. Tehillim may thus be heard as traditional and new at the same time. 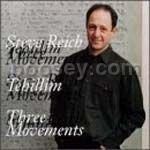