The Desert Music was begun September 1982 and completed in December 1983. It was commissioned by The West German Radio, Cologne and The Brooklyn Academy of Music in New York. It is a setting of parts of poems by the American poet William Carlos Williams. The duration is 46 minutes.

The title is taken from Dr. Williams’ book of collected poems, The Desert Music. From this collection I chose parts of The Orchestra and Theocritus: Idyl I – A version from the Greek. From another collection I chose a small part of Asphodel, That Greeny Flower. There are no complete poems used and the arrangement of parts is my own. This arrangement was my first compositional activity and the form of the piece into a large arch follows the text, presented below:


"Begin, my friend
for you cannot,
you may be sure,
take your song,
which drives all things out of mind,
with you to the other world."
from: Theocritus: Idyl I – A version from the Greek


"Well, shall we
think or listen? Is there a sound addressed
not wholly to the ear?
We half close
our eyes. We do not
hear it through our eyes.
It is not
a flute note either, it is the relation
of a flute note
to a drum. I am wide
awake. The mind
is listening."
from: The Orchestra


"it is a principle of music
to repeat the theme. Repeat
and repeat again,
as the pace mounts. The
theme is difficult
but no more difficult
than the facts to be
resolved."
from: The Orchestra


"Well, shall we
think or listen? Is there a sound addressed
not wholly to the ear
We half close
our eyes. We do not
hear it through our eyes.
It is not
a flute not either, it is the relation
of a flute note
to a drum. I am wide
awake. The mind
is listening."
from: The Orchestra


"Inseperable from the fire
its light
takes precedence over it.
Who most shall advance the light –
call it what you may!"
from: Asphodel, That Greeny Flower


As indicated above, there are five movements forming a large arch, A-B-C-B-A. The first and fifth movements are fast and use the same harmonic cycle. The second and fourth are at a moderate tempo, share the identical text ("Well, shall we/ think or listen?…") and also share a common harmonic cycle which is different than the one used in the first and fifth movements. The third, middle, movement is the longest (17 minutes) and is itself an arch form A-B-A where the A sections are slow and the B section moves up to the moderate tempo of the second and fourth movements. The third movement has its own harmonic cycle. There are no pauses between movements and the piece is played attacca from beginning to end. The changes of tempo between movements are made suddenly by metric modulation always using the 3:2 relationship to either get slower (dotted quarter equals quarter) or faster (eighth note triplet equals eighth note.)


Following the arrangement of the text, three cycles of harmonies were composed to serve as the basis for the individual movements. I chose to present these cycles as a series of pulsing chord, a similar in rhythm to the pulses in my earlier Music for 18 Musicians, but more chromatic and ‘darker’ in harmony than the earlier piece, to suit the text of The Desert Music. The harmonic cycle of the first and fifth movements cadences, though with some ambiguity, on a D dorian minor center. This ambiguity resides in the fact that a prominent A altered dominant chord follows the D, but an F altered dominant proceeds it. The cycle of the second and fourth movements does not clearly cadence on any center, though it too contains a prominent altered A dominant chord. The cycle for the large third movement is the most ambiguous of all since all the chords are altered dominants with their root moving in major and minor thirds making a cadence impossible. Thus the overall harmonic movement of The Desert Music is from the possibility of a D dorian minor center to more and more ambiguity, until in the third movement, where the text would seem to suggest it, there is no clear harmonic center at all. This ambiguity more or less remains until well into the fifth movement when, just before the chorus enters, there is a large orchestral cadence – albeit coming from that F altered dominant. This chord is then used to move from one movement to the other at each change of tempo. The piece ends with the women’s voices, violins and mallet instruments pulsing the notes (reading up) G, C, F, A which are the common tones to both the A altered dominant and the D dorian minor. The piece therefore ends with a certain harmonic ambiguity, partially, but not fully, resolved.


In the orchestration of The Desert Music I wanted to use all the orchestral instruments to play the repeating interlocking melodic patterns found in much of my earlier music. The strings begin this kind of poly-rhythmic interlocking shortly after the opening pulses of the first movement just before the chorus enters singing, "Begin, my friend…" To give the strings the extra ‘snap’ needed in this kind of rhythmic interplay they are doubled by the woodwinds. The chorus, throughout the piece, is doubled for support either by the woodwinds or by the muted brass. This of course, is an old technique, but one that here helps create that mixture of vocal and instrumental sound I have been working with since my composition Drumming in 1971. To further enhance this mix of vocal-instrumental sound, both the chorus and woodwinds are amplified and mixed together. The percussion is emni-present, usually playing mallet instruments to supply the on-going pulses. Here and there one will also hear maracas, clicking sticks, bass drums, timpani and large tam-tam.


The pulse which begins and ends The Desert Music and recurs throughout it is significant both musically and as a kind of wordless response to and commentary on the text itself. Musically it presents the harmonic cycles of the movements as a kind of pulsing chorale. The pulse is also developed in the second and fourth movements from a simple eighth note pulsing in all voices and instruments to interlocking groups of two and three beats each forming overall polyrhythmic pulses. This grows out of the two and three beat groupings found in my Tehillim (1981). In terms of the text, the vocalise syllables are a kind of wordless response to, "Well, shall we/ think or listen?…" in the second and fourth movements. That constant flickering of attention between what words mean and how they sound when set to music is one main focus of The Desert Music.


As to the meaning of the text and music I hope that it speaks for itself. I have loved Dr. Williams’ poetry since I was 16 years old and picked up a copy of his long poem Patterson just because I was fascinated by the symmetry of his name – William Carlos Williams. I have continued reading his work to the present. I find Dr. Williams’ finest work to be his late poetry written between 1954 and his death in 1963 at age 80. It is from this period in the poet’s work that I have selected the texts for The Desert Music – a period after the bombs were dropped on Hiroshima and Nagasaki. Dr. Williams was acutely aware of the bomb and his words about it, in a poem about music entitled The Orchestra struck me as to the point: "Say to them:/ Man has survived hitherto because he was too ignorant/ to know how to realize his wishes. Now that he can realize/ them, he must either change them or perish." When I began work on The Desert Music I thought those words were too grave to set and thought I would use a tape of Dr. Williams reading them instead. When the time came to compose the third movement in the summer of 1983 I did know how to set them because the character of the harmonies in the third seemed to generate just the right setting. I was very glad now I did not resort to using a tape. In the center of the piece is the text, also from The Orchestra, which says, "it is a principle of music/ to repeat the theme. Repeat/ and repeat again,/ as the pace mounts. The/ theme is difficult/ but no more difficult/ than the facts to be/ resolved." Those at all familiar with my music will know how apt those words are for me and particularly this piece which, among other things, addresses that basic ambiguity between what the text says, and its pure sensuous sounds. 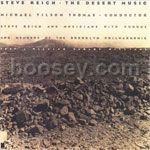