Variations for Winds, Strings and Keyboards (1979) introduces new harmonic, formal and timbre material into my music. The constant yet slow harmonic change (there are no repeat markings in this score), the slow recurrence of materials form variation to variation, and the scoring for oboes, flutes, full brass, strings, acoustic and electric keyboards, all give this piece a sound quite different from my earlier music.

These variations are on a harmonic progression somewhat in the manner of chaconne, but with a considerably longer harmonic progression than the four or eight bar progressions customarily found in the chaconne. The progression begins in C minor (or C dorian) and works its way via several keys into C-flat, enharmonically to B, and then, by gradually dropping sharps or adding flats, moves slowly back to C minor (or C dorian). These are three variations on the complete cycle lasting approximately six, ten and nine minutes each. The harmonic progression is followed in the middle register so that from time to time the bass may vary from variation to variation. The rhythm of the melodic patterns in the winds remains more or less constant throughout each variation, while the notes slowly, yet constantly, change to match the changing harmony. In the first variation the rhythmic pattern for the winds is two bars long, changing meters back and forth between 6/4 and 5/4. The second variation begins as two bars of alternating 5/4 and 6/4 and, after about a minute, changes into two bars of 8/4, each divided into five plus three. The final variation pattern is four bars long, changing meters 4/4, 6/4, 4/4 and 3/4 Since the first variation uses only quarter and eighth notes, while the second and third introduce an increasing amount of sixteenths, the effect is one of becoming more and florid and melismatic.

At all times throughout the piece there are at least two wind instruments playing the melodic pattern in harmony with each other, while a third plays in cannon with the upper voice. The winds, three oboes doubled by electric organs, or three flutes doubled by two pianos and electric organs, play the melodic material throughout, while the slowly changing harmonies are played by the strings also doubled by electric organs. During the first and last variation a full brass section of three trumpets, three trombones and tuba gradually fade in and out, to complete the harmony of the middle register strings and organs. 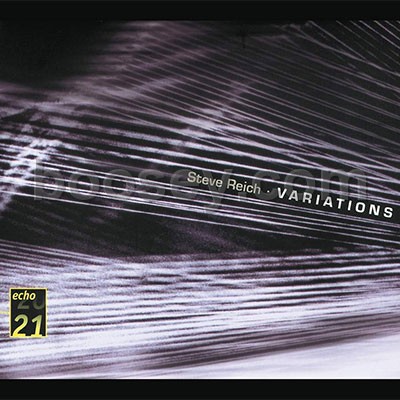