I was a physics major in college and still check in on scientific cosmology from time to time. This interest led me to a lecture for civilians on the topic of string theory, an idea which was not yet formulated when I was in school. The lecturer, Brian Greene, used virtually no mathematics to explicate a view of the universe that was invented to resolve mathematical paradoxes. At the time, I actually felt as though I had an intuitive sense for what he was saying, although all that remains now are scattered, impressionistic recollections of ten dimensions - time plus nine spacial dimensions - coiled up like pieces of string such that a casual sweep of the hand passes imperceptibly through them. Our three-dimensional minds translate the movements into our evolved/adapted modes of perception

Composing music is for me a very real metaphor for the idea that we construct our reality and it could be said that all my music springs from the simultaneous fear and excitement at the incomprehensible possibilities of reality, whether stimulated by a star-filled sky or a physics lecture. I wouldn’t say that String Theory has a “program” per se, but I did imagine that for the first three-quarters of the piece, each phrase logically, earnestly, and at times, desperately turns over the ramifications of this mathematical view of the universe. There are flickers of understanding but over all the trajectory is toward a chaos of thought in which string theory (small ‘s’) remains incomprehensible, but has nevertheless shaken confidence in a traditional/perceptual view of the natural world. Then, in a cathartic eruption, the chaos gives way to a non-linear, intuitive and ecstatic vision/understanding. In this sense, I suppose String Theory (big “S’) is a piece about spiritual/mystical/religious revelation born from scientific discipline.

There are also some more concrete manifestations of string theory. The idea that a simple linear sweep of the hand along what seemed to be a two dimensional space would in “reality” be engaging many more dimensions was musically suggestive to me.

I imagined a piece which used the “flattest” most unuanced musical material - scales - to engage multiple levels of memory and perception and create the illusion of counterpoint, harmonic motion and expressive light and dark. The scales interact with the natural resonance - the gravitational field, so to speak - of a string quartet's open strings. Just as string players use their open strings to check where they are, the open strings and their natural harmonics (which I use frequently) enable the listener to follow the progress of the width-less scales as they delineate a path through a large multi-dimensional expressive space.

The digital delay adds yet another dimension and warps time-space as the scales echo at a tempo slightly different than the one in which they were originally delivered.

I realize that this note is perhaps as opaque as string theory. But it should be remembered that what I was thinking about while writing the piece need not limit what you hear in the piece. Music is a transaction, composer and listener both bring

experiences and preoccupations - realities - to the concert hall. My ultimate ambition for String Theory is that it be a fascinating arrangement of sounds in time. 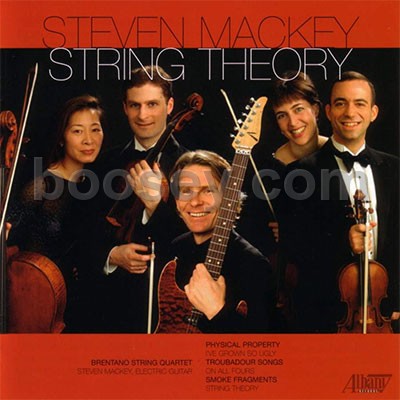