The first piece of "classical music" I remembering hearing – "Peter and the Wolf" doesn’t count – was Beethoven’s Fifth Symphony. I was six years old and had been listening to a great deal of early, new-at-the-time rock and roll; my mother said, "That’s fine, but you might like this as well." It was a recording of the Beethoven symphony, and I remember thinking that a whole new world was opening up to me. I decided that I wanted to become a composer.

So when it came time for me to compose my own Fifth Symphony, my thoughts returned fondly to that time, and I resolved to tip my cap to Beethoven’s mighty symphony. However, I wouldn’t want to overstate the relationship. The opening of my symphony revisits the famous four note rhythm of Beethoven’s, but the notes are quite different and things take a different turn after a few bars. The most extended reference is to the connective passage that links the third and fourth movements of the Beethoven: the mysterious passage for timpani over a long chord in the strings. My timpani part is identical to Beethoven’s; once again, though, what goes on around it is different.

One of Beethoven’s most radical decisions in his Fifth Symphony was to return to the music of the scherzo in the midst of his finale, and this led me to ponder the structure of my own piece. The first and last movements – both allegros – are discrete entities, but the "slow movement" gives way to the scherzo, after which the slow movement returns and the scherzo once again succeeds it. This results in the blurring of lines between movements in the traditional sense.

As is often the case in my music, the language ranges freely – but I hope in an integrated way – between a dissonant language and a more consonant one. There is no programmatic element to the work, though I do hope to transport the listener through a series of emotional states, from turbulence to serenity.

"Rarely does a brand-new piece of music really grab me and keep me completely engaged on first hearing. But the world premiere of Christopher Rouse's brilliant, exciting and at times hauntingly beautiful Fifth Symphony had that effect. Judging by the roaring ovation after the performance, lots of others were similarly affected." —Dallas News 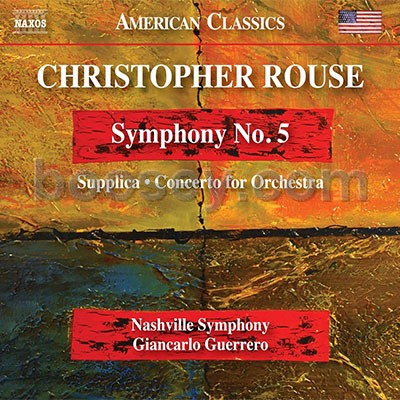