* crotales, cymbals, tam-tams and vibraphone are all bowed as well as struck

The title is Sanskrit and means “room of light”. For Unsuk Chin, the title does not have any specific religious or mythological meaning. Instead, it refers in many respects to the character of the work as well as to the composition techniques employed. The composer tells that in Rocaná she was concerned with the behaviour of beams of light – their distortion, refraction, reflections, and undulations. This was not a matter of mere illustration, but of their depiction by musical means: “Art as harmony parallel to nature” (Cézanne). Since sound waves – as the physical phenomenon of a bodiless oscillation – are similar to light waves, music seems the appropriate medium for a “translation” of light phenomena. Furthermore, physical phenomena like depth and density, spatial perceptions and illusions of various sorts were important associations in the composition process. Ólafur Elíasson’s installations The Weather Project and Notion Motion provided additional extra-musical inspiration.

The music in Rocaná flows uninterruptedly. The overall picture and the overall structure are one entity, one “tonal sculpture". However, one can look at it from various angles, since the inner structures are constantly changing. Even if the music at times gives the impression of stasis, subtle impulses, interactions, and reactions are continually present. Certain elements appear time and again, yet always in varied form. They are not developed: they instead lead seamlessly into one another and blend, forming new interactions and processes. Orderly structures suddenly turn into turbulence and vice versa. Pointillist structures transform into cloudlike aggregates of sound and vice versa. These processes are often distinguished by self-similarity.

The composer once pointed out that because of her cultural background she has "a certain aversion to the sound world produced by traditional symphony orchestras rooted in 19th-century aesthetics, and I feel a great deal of affinity for non-European musical cultures. That is why I always try to introduce a completely different colour into my compositions based on my experience of non-European music." In Rocaná, the instrumentation is more or less standard, but an attempt has been made to treat the orchestra like a "super-instrument" as well as like a virtuoso “illusion machine” that creates something new out of that which is familiar.

Primarily through the combination of various instrumental techniques, through rhythmic development and the interplay of overtone structures and microtones, shifts and changes of timbre are achieved; light and colour phenomena playfully alternate with one another.

Reproduction Rights:
This programme note may be reproduced free of charge in concert programmes with a credit to Maris Gothoni.

“…a continuous 20-minute score Chin has crafted as a field of unquiet aural dreams. She is fascinated by the volatility of orchestral sounds and how they evolve into other, seemingly unrelated musical events, travelling in waves as light does. Her huge orchestral palette is laced with all manner of percussion, including Japanese temple bells and a xylophone of stones. At times, she employs it as sparingly as a neo-pointillist painter; at other times, violent chords ricochet around the brasses, turning the ensemble into a mechanistic juggernaut.” Chicago Tribune

“The piece is a knockout. It begins with a gnarly, clattering, explosion…Then comes a pattern of background harmonies, always simmering, eerily quiet and pervasive. But throughout the work, jolts of energy keep happening: leaping lines, ominous 12-tonish themes that pierce the tranquil background buzz, outbursts of wailing brasses and metallic strings that come at you like a musical flamethrower.” New York Times 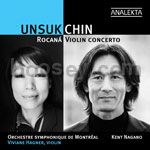