"Der ewige Tag, York Höller’s choral symphony (if it can be so called), which was performed for the first time at a concert celebrating the 15th anniversary of the Cologne Philharmonie, has more complex similarities to the music of Gustav Mahler than two quotations from the 7th Symphony [which was performed in the same concert, ed.]. The use of vocal and instrumental elements in the same composition, too, seems a rather superficial reference. Rather than being a mere setting of words into music, the spirit of music as created out of language determines the shape of the work. The poetry chosen by York Höller ranges wide over time and space, extending far beyond the course of a day... This creates a superstructure of never-ending movement, whilst also allowing concrete textual interpretations.
Semyon Bychkov and the symphony orchestra of the WDR managed to present this conflict consistently and with a constant transparency: both in the dramaturgy as a whole, and in the fine details of the ‘Klanggestalt’ (as the composer calls it): at the beginning, sustained string notes over which coloured flecks appear, splintered sounds in characteristically estranged forms, wind miniatures, a flute with double tonguing. Sometimes the sound condensed into opulent structures, saturated with sensuality. The chorus, too, set up tensions in contrast to the long-drawn instrumental sounds. The text was mostly left unbroken by the recitation, up to a point where the notes ceased to exist altogether: music as pure text."
(Norbert Stich, General-Anzeiger Bonn, 17 Sep 2001)

"With his Der ewige Tag, York Höller composed a ‘sun’s movement’ from East to West: a poème musicale whose powerful orchestral sound-canvasses of sound have a refined rhythmic texture, are richly interwoven with broken figurations and cleverly shaded off against each other."
(Frieder Reininghaus, NDR "Musikforum", 17 Sep 2001) 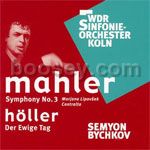