Briefing at the Russian army headquarters in Manchuria, northern China – a major offensive against the Japanese enemy is about to be launched. In spite of this a young widow from St Petersburg, Lydia Pavlovska, is throwing a ball. General Kachalov, commander of the Russian army, plans to decline the invitation, citing the tense situation, though in reality he is rankled by the attractive Lydia rebuffing his advances. This is no secret to his comrade Colonel Baltishev, head of military intelligence, who himself has taken a liking to her, even though he suspects her of espionage. Before the war the young widow is reported to have been in communication with a Japanese officer.

The Russian headquarters have been infiltrated by a German war correspondent under a false identity, Roderich Zirbitz, who is looking for interesting copy and photos for his newspaper. He is soon exposed, however, and faces the wrath of General Kachalov, who is at daggers drawn with all journalists. As his daughter Tatiana has been flirting with Roderich, he forbids her to go to Lydia Pavlovska’s ball and puts her under house arrest.

Then Lydia herself arrives to persuade the General with disarming frankness to come to the ball after all – and he agrees. While there she recognizes a Chinese servant as Major Ito in disguise – the Japanese officer who had courted her in St Petersburg and is now spying at the Russian HQ. Though they are on opposing sides because of the war, their previously suppressed passion erupts.

General Kachalov stumbles upon a conspiratorial meeting between Ito and two other Japanese spies. When he confronts them, they overpower him, but are caught by surprise themselves when Lydia appears accompanied by a group of Russian officers. This plunges Lydia into a crisis of conscience, since Ito and his fellow spies face the death penalty. Repressing her conflicting feelings, she resumes the role of charming hostess. Meanwhile Tatiana, against her father’s orders, has sneaked into the ball, while Roderich has assumed another identity to allow him to follow what’s going on as well as continue his wooing of Tatiana. The Japanese spies escape from detention. Ito seeks refuge with Lydia. Again he declares his love for her. —

In order to cross enemy lines so that he and his comrades can get to safety, Ito needs to know the password. Lydia promises to get it for him by inviting General Kachalov to an intimate tête-à-tête after the ball. When she tries to get Kachalov to reveal it to her, he begins to suspect, and gives her a false password instead of the correct one, »Spring Storms«. So Ito will have enough time to escape, Lydia tries to detain Kachalov for as long as possible – and all the more when he has to go and change the password as per routine. As Ito has the wrong password anyway, he is apprehended. He is furious about being betrayed by Lydia, who he thinks is the General’s lover. He faces certain death. Kachalov indicates to Lydia that he might let the prisoner escape if she finally gives him what he desires. She hesitates only briefly before setting off for the General’s quarters.

Some time later all the figures meet again in a hotel in San Remo for the peace negotiations. Kachalov is out of favour with the supreme commander of the Russian army, Grand Duke Mikhailovich, because he did in fact let Ito escape – no doubt in exchange for favours from Lydia. Ito has been promoted to colonel and is head of the Japanese delegation at the peace talks. Roderich has abducted Tatiana from the Swiss boarding school where her father sent her, and they are now at the same San Remo hotel, where Tatiana has to hide from her father. Lydia, for her part, has come to save Kachalov’s reputation. Although or because Kachalov behaved like a gentleman and demanded nothing in return for letting Ito go, she will not do anything to dispel the rumours that are rife. Kachalov would otherwise be left standing there »like an old ass«. Once again he asks for her hand, which, to his astonishment, she gives him. But a moment later she runs into Ito. And once the misunderstandings from their last meeting are cleared up, Lydia hopes the two of them can embark on a new life together – and so she turns the despairing Kachalov down again. Lydia then happens to meet a Japanese woman who says she is Ito’s wife Sayuri, and Lydia realizes there can be no new life together with Ito. In the meantime Roderich and Tatiana have got married secretly and ask the fuming Kachalov for his consent. Lydia placates him and agrees once and for all to marry him. Ito wistfully watches her leave, before following Sayuri.
© Ulrich Lenz, Komische Oper Berlin 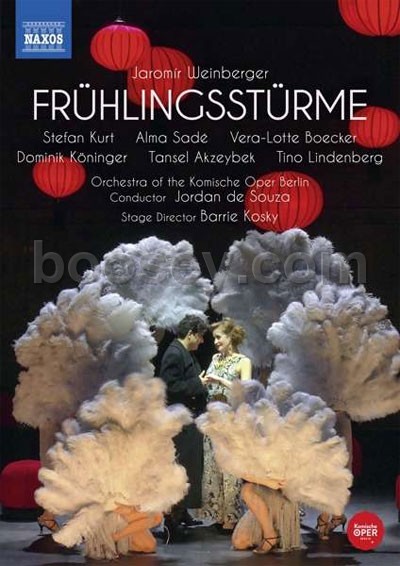