In 16th century Germany a war is raging among the smaller states, the provinces and the principalities. The Landgraves of the Palatinate, Hesse and Treves have formed an alliance against Count Franz von Sickingen, whose castle, not far from Kreuznach, is to be conquered by the Palatine mercenaries led by Conrad von Wenckheim. Franz Baldung, a captain of Wenckheim’s troops, suffers amnesia after his head was injured in a war. Thus he has no memories when the troops march through his home place and are quartered on one of Sickingen’s tenant farms. There Hedwig lives with her daughter Armgard, the love of Franz’s youth, who is bullied by Wenckheim and the mercenaries during a drinking bout. It is only when Armgard, forced to sing for the soldiers’ entertainment, collapses, apparently dead, that Franz awakes from his trauma.

Dream and reality intermingle in the ensuing nightly episodes, as the human chaos is carried to an extreme by elemental spirits, finally allowing the confusion to be dissolved. Wenckheim orders his troops to advance to Sickingen’s castle which is to be conquered at dawn. The hunter Gottfried, who knows the surroundings, is forced by the troops to lead them through the dark forest. He is, however, loyal to Sickingen and instead takes the soldiers to the elves’ rock, intending them to succumb to the magic of the elves’ song. Armgard, who has not died but only fainted, joins the elves to rescue Franz. Hedwig recognizes Conrad as the man who betrayed her with a fake marriage and as the father of her daughter. She wants to take her revenge on him, but Conrad, the cynical warrior, is also brought to his senses by the psychic shock and finally renounces the trade of war. –

Armgard is not only a character playing a role in the story but also a symbolically elevated figure. She represents the longing for a unified nation, still powerful in 1864. Not only the Elves’ Song, which later became famous as the Barcarolle in the Tales of Hoffmann, but also Offenbach’s Vaterlandslied, composed in 1848, is audible throughout the opera as a second musical line of thought. But the unification invoked here is not the result of power-political speculations, but of cultural identity. With its anti-chauvinist, pacifist attitude, written from the perspective of a German composer who defected to the ‘hereditary enemy’, Les Fées du Rhin is an extraordinary document of European Romanticism. 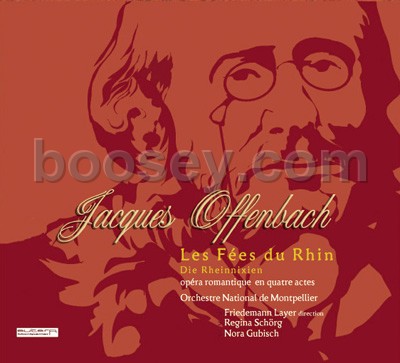