The paradise of the Famous Animals

During their journey, a reporter and his pilot are forced to make an emergency landing. Soon they are surrounded by animals. A dove, who introduces itself as the dove from Noah’s Ark, negotiates with the other animals to make sure the men are welcomed and told of their whereabouts: they are in that part of paradise which is reserved for famous animals, such as the snake from the Garden of Eden, Eschylus’s turtle, the bear from Berne, Jonah’s whale, Schubert’s trout, the hound of the Baskervilles… Soon the geese of the Capitol announce another visitor. The animals are upset, however, when they see a strange bird: a scruffy woman in tears who repeats in a strange sing-song voice that she is the “suburbian swallow”. A comittee is set up to investigate the case. The journalist is allowed to attend the tribunal, while the pilot begins to repair his pressure gauge.

The animals discover two stab wounds on the swallow’s chest that must have been the cause of her death. Hearing the clamour, Procne approaches. She was also once transformed into a swallow and now sees she has a rival. Suddenly a voice from Heaven is heard, announcing that a second suburbian swallow had just appeared at the gate of the paradise for humans. This raises new questions. What kind of creature is she, appearing at several places simultaneously and claiming a place in several paradises? To cap it all, the swallow disappears at that very moment, leaving no trace. At last, the journalist claims to have solved the puzzle: the suburbian swallow, “L’Hirondelle du Faubourg”, is a famous chanson whose fame will survive that of even the most famous people and animals in eternity! After that, the two men enter their repaired aeroplane and set out to discover new sensations. The animals are left behind feeling indignant.

"L’Hirondelle inattendue comes along like a piece of ‘absurd musical theatre’ whose verbal wit finds its counterpart in music that is composed with charm and technical mastery ... This gem of twentieth-century operatic literature must not be allowed to be forgotten.” Opernwelt 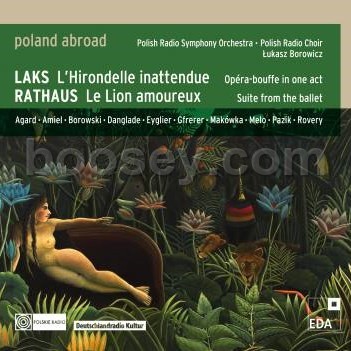