ACT I The Happening
The year is 1968, five years after the assassination of President John F. Kennedy. The place: Andy Warhol's Factory in New Yark City. The event: a Happening. Cafe society in extremis. Hollywood celebrities Liz Taylor and Grace Kelly complain about the perils of fame. The partygoers wonder at all the stars who are not present at the event: where's Ringo? where's Mia? where's Jackie? The phone rings: Jackie Kennedy's back! She's on her way to the party. Her time of mourning JFK's death is over: she wants to re-enter society. She arrives at the Happening and must face her public: their attention thrills but also fatigues and frightens her. She meets Pop artist Andy Warhol: she consents to pose, and he paints her portrait. The portrait turns into a Dancing Jackie ballerina, whom the real Jackie commands to dance. Then Aristotle Onassis, one of the world's richest playboys, arrives at the party with opera diva Maria Callas. The two squabble, and Ari jilts her. He introduces himself to Jackie, and in an attempt to win her favor invites her to flee the Happening and go to see a new art-house movie, I Am Curious (Yellow). Still immured in melancholy reflection, she is unsure: but when the phone rings, bringing the news of another assassination (Bobby Kennedy's? Martin Luther King's?) she accepts Arl's offer of security and, on his arm, leaves the party for the island of Skorpios to marry him.

ACT II The Island
One year later, Ari and Jackie are on the yacht Christina, moored at the island of Skorpios. Jackie is reading a book; Ari is carousing with his playboy pals, with whom he sings a drinking song. He offers Jackie a drink: she refuses. The marriage is clearly on the rocks. Jackie is increasingly given to fits of remembrance, of trance: she remembers Jack (JFK), her past life, the lost promise. The phone rings; it is Maria, who tells Ari of her career troubles. They agree to a tryst at the lido, a swank hangout. After Ari hangs up, the phone on the yacht rings again: Ari hears the tragic news that his son has been killed in an accident.
Dreaming of the new frontier, Jackie sleepwalks onto the island; Maria fallows her, and the two sing -apart, but more and more together -of their parallel traumas, their eternal flames. At the end of their duet, they embrace, reconciled at last. The Paparazzo, who has been following Jackie throughout the opera, bursts onto the island, and tries to take their pictures. Maria is happy to be photographed, but Jackie orders her to smash the camera. Maria relents and carries out the command, freeing Jackie from the spell. Maria wishes her well, and leaves the island. Jackie, alone, makes her long-awaited phone call to the other Side, to JFK, who asks to be forgiven for the suffering he has caused. Together they dream of what might have been. Strengthened and transfigured by her encounter with the voice of her beloved, she decides to return to America, to her children, to the fragments of the new frontier.

Jackie O is a celebration of musical life in the late sixties, a pop opera that explores the interplay of musical idioms associated with "high" and "popular" culture in America. To compose these various idioms into my musical language, I draw on my background as a musician who came of age during the sixties, playing in rock and jazz ensembles, performing in avant-garde improvisation groups, and paying my dues as a cocktail pianist in nightclubs, while also being trained as a composer of concert music in the symphonic tradition. The music I composed for Jackie O is filled with drama and suspense, to heighten the effect of a grand spectacle. I also create more intimate moments for the performance of solo arias. The overture, entitled "Jackie's Song," is performed by solo cello, introducing an elegiac leitmotif that is repeated with increasingly elaborate orchestration in the course of the opera. The solo suggests an opposition between the private and public Jackie, and is interrupted by a riveting snare drum rim-shot. Interruption is an important compositional structure throughout Jackie O. I use sudden shifts in timbre, abrupt tempo changes, and contrasts in consonance and dissonance to create a complex, multi-layered music that amplifies the multiple meanings in Wayne Koestenbaum's libretto. At times the percussion also serves to disrupt the flow of song, with a ratchet for the ringing telephone, the sound of a siren, or the clicking camera and clicking heels of the tap-dancing paparazzo. All the musical numbers are rigorously structured, with a central motif or "hook" that I transform through polyrhythmic counterpoint and unusual orchestrations. Most important is the human voice, and each character in the opera has a unique sound world. Jackie's arias, such as "Egyptian Time," "Jackie's Credo," and "All His Bright Light," are exotic, mournful, and highly expressive. By contrast, the songs performed by Ari have a Vegas sound: "I am Curious (Yellow)" and "Stiff Drink" are reminiscent of Dean Martin or Sammy Davis, Jr., members of the Sixties "Rat Pack." Maria gets the operatic treatment in arias such as "Addio del passato" and "The Flame Duet." Since Maria was losing her voice in the sixties, she sings melodramatically in the low range, and even speaks on occasion. Liz Taylor sings bluesy, cat-on-a-hot-tin-roof riffs, while Princess Grace croons à la Doris Day. Andy Warhol's aria, like his art, is a series of inflected repetitions. The chorus plays an important role throughout the opera, commenting on the action like a Greek chorus or the cast of a sixties television variety show such as Laugh In. In "1968" and "Jackie's Coming," the chorus performs whirlwind, snappy musical numbers punctuated by pulsating brassy rock rhythms. The voices are treated percussively in "Ballerina." The singers scat on the "ballerina" while snapping their fingers to a Dancing Jackie, accompanied by a devilish violin. "Don't Look Back" features contrapuntal layering of voices, and in "1968 (Reprise)" the chorus sings one last time in a minor key, as if drugged. In Act Two, the chorus turns into a gaggle of playboys, singing an updated version of the traditional operatic drinking song: "Stiff Drink" is a catalogue of cocktails from A to Z. They perform to a grooving bass line, crotales, funky guitar, Hammond organ, and flutter-tongued brass. In "All His Bright Light," the playboys provide a contrast to Jackie's lyrical meditations, as they chant like robots: "The essence of tragedy is repetition." The operatic plot evolves through a series of dramatic duets, such as the exchange of credos between Jackie and Andy Warhol in the first act. In this duet, the soprano and high baritone sing melodies that are mirror images of each other, introduced separately and then combined. Ari and Maria also sing a melodramatic recitative together, in rococo arpeggiations accompanied by a solo horn. "The Flame Duet" in the second act features Jackie and Maria in a vocal tour de force for two sopranos, framed by dissonant cluster chords. Finally, in "Jack's Song," Jackie sings a duet with the ghostly voice of JFK. He asks for forgiveness, as fragments of "Jackie's Song" are repeated in an ostinato bass line. The opera concludes with folk guitar strumming vigorously, while Jackie and the chorus sing "The New Frontier is Here." But is it really here? A downward glissando breaks the spell, and the solo cello returns one last time, plaintively and prophetically. Jackie is a complex figure in the opera, continually reflecting on her conversion into an American icon. Similarly, this opera reflects on the operatic medium itself, as a living form rediscovered and revived within an American context. Jackie O is recorded by the Houston Opera Studio and the Houston Grand Opera, conducted by Christopher Larkin, on Argo 455 591-2. 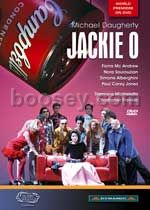